A US delegation to the UAE announced on 18 November that 'substantial' construction has been completed on the US pavilion at the Expo 2020 site, nearly a year before the event is due to open its doors to public.

Centred around the theme 'Life, Liberty and Pursuit of the Future', US participation plans to bring the message of 'innovation and freedom' to Expo 2020, highlighting American expertise in areas such as aerospace and future mobility solutions.

US Ambassador to the UAE, John Rakolta Jr., recently told MEED: "This is an opportunity for the US State Department to highlight America not as a corporation, but as a country. It [the pavilion] represents everything about America - democracy, life, happiness, pursuit of the future." 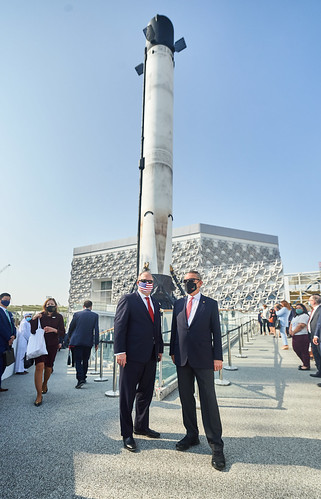 Dwell time around the 1,800sqft pavilion is estimated to be between 18-23 minutes, starting from a travelator and all the way through the two-storeyed structure. Programming revealed so far includes live feeds from the NASA Mars rovers Opportunity and Perseverance as well as the deep-space mission Voyager 2, and moon rocks from Apollo 12 mission. A key exhibit recently unveiled at the pavilion is a replica of SpaceX Falcon 9 rocket.

We have lift off! We are thrilled to launch the Pavilion's Rocket Garden featuring our very own rocket. Towering over Expo 2020, the rocket will be a highlight to the visitor experience at the USA Pavilion.#USAPavilion #USAExpo2020 #Expo2020 #Dubai pic.twitter.com/mU2yd8Gped

A major exhibition installation is planned for early 2021, while the finishing touches will take place over the summer.

The US first unveiled its plans for Expo 2020 in November 2018, announcing that corporations PepsiCo and Virgin Hyperloop One (VHO) would be official pavilion partners. PepsiCo is the lead sponsor and official beverage partner, however VHO is no longer a pavilion sponsor.

The pavilion is being executed by the US Department of State, with Thinkwell Group and Global Ties US contracted for the exhibition, operations and the cultural programming. Construction works began in March 2020.

The State Department initially struggled to raise funds for the pavilion as US legislation mandates that funding for its participation at world expos comes from contributions from corporations and states rather than from taxpayer money. The UAE government ultimately stepped in to finance the pavilion. In a recent interview, Rakolta mentioned that the team was "thankful to the Emirati government for their support".

US pavilion secures funding for Expo 2020