The number of Covid-19 cases in the Middle East and North Africa (Mena) region crossed 17,073,500 on 1 February 2022, according to Worldometers data collated by MEED.

In the same period, Tunisia, Jordan and Lebanon noted overall case growth of 6.5 per cent, 6.3 per cent and 6.2 per cent, respectively.

Saudi Arabia
The kingdom's Transport General Authority says vaccination with a booster dose and the ‘immune’ status on the Tawakkalna app will be required to use land, sea and rail transportation in Saudi Arabia starting 1 February. The decision includes the use of trains, taxis, car rentals, passenger transport applications and buses for transporting passengers inside and outside cities, in addition to ferries between Jazan and Farasan island. Individuals with valid exemptions from vaccines are not included in the decision.

UAE
The National Emergency Crisis and Disasters Management Authority has eased restrictions on flights from Botswana, Congo Republic, Eswatini, Ethiopia, Kenya, Lesotho, Mozambique, Namibia, Nigeria, South Africa, Tanzania and Zimbabwe. Travel from these destinations was suspended amid the growing number of omicron cases since the end of last year.

Additionally, Abu Dhabi Health Services Company (Seha) has opened the Etihad Heroes healthcare centre for children. The centre is located in the same area as the previous Al-Etihad vaccination centre, and is offering Covid-19 vaccinations for children between three and 16 years old.

Bahrain
Bahrain's Covid-19 yellow alert level will remain in place until 14 February as cases continue to increase in the country. Updated in November by Bahrain’s National Taskforce for Combating Coronavirus, the Covid-19 Alert Level Traffic Light system is now based on a rolling average of positive cases in intensive care units (ICUs). If the rolling average of positive cases in ICUs is 50 or less for 14 days, green level restrictions will apply.

Yellow level is applied for 51 cases in ICUs for seven days, while orange applies if 101-200 people are in ICUs for four days. The red level is assigned if more than 201 cases are under critical care for three days. ICU cases are currently under 15 in Bahrain, and undersecretary at the Bahraini health ministry, Waleed al-Manea, said the decision to apply yellow alert rules had been taken as a precautionary measure amid the spike in new cases.

Oman
The Civil Aviation Authority has extended until further notice travel guidelines issued on 26 December for passengers travelling to Oman, including the requirement for two doses of vaccines for all expatriates and foreign nationals aged 18 years and above, and a negative PCR test taken not more than 72 hours prior to arrival for all arrivals. Exemptions are permitted for those who booked a test on arrival before the extension of the rules and if the arrival date does not exceed 72 hours from the extension.

Kuwait
Children aged between five and 11 years of age are now eligible to receive Covid-19 vaccines in Kuwait, according to the country’s health ministry. Appointments will be given starting this week and high-risk individuals will be prioritised. 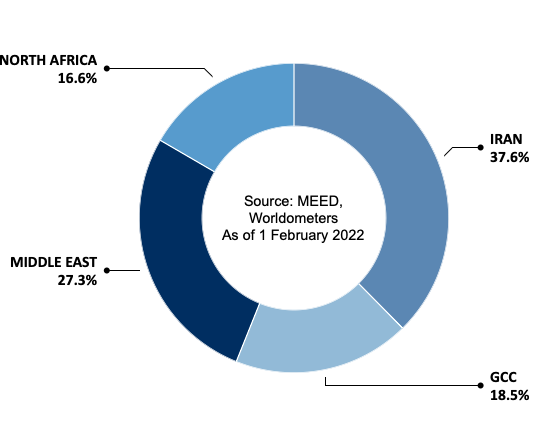 Iran
Poland has donated 1 million vaccines for Afghan refugees in Iran, marking the second shipment to Tehran from the country after the first tranche was sent in October. More than 131 million doses of Covid-19 vaccines have been administered in Iran, health ministry data showed on 29 January.

Egypt
Cairo received 4 million doses of the Oxford-AstraZeneca vaccine through the Covax and Gavi alliance last week. Donated by the UK, the shipment arrived in three batches on 27 and 28 January. The next day, Egypt also received 15,000 doses of Evusheld (tixagevimab co-packaged with cilgavimab), Oxford-AstraZeneca’s antibody combination to provide pre-exposure protection from Covid-19. Egypt was the first African country to receive the medication. Further deliveries are expected in the coming weeks as part of a total supply of 50,000 doses in 2022, according to local media.

Jordan
Jordan faces a fourth wave of coronavirus. Amman reported the highest number of daily Covid-19 cases since the start of the pandemic last week, with 11,478 new cases confirmed on 24 January. Occupancy rates of isolation beds by Covid-19 patients in the country’s northern, central and southern regions stood at 10 per cent, 19 per cent and 8 per cent respectively as of 24 January.

Morocco
Morocco has started development work for a vaccine production factory expected to eventually mobilise an investment of approximately $450m to $560m. The public-private partnership project with Swedish firm Recipharm includes a manufacturing and syringing plant in Benslimane with three industrial lines. Their combined production capacity is expected to reach 116 million units in 2024.

The lines will be dedicated to the production of pre-filled syringes, liquid vials and lyophilised vials. The projected investment is approximately $225m, and the start of production of the trial batches is scheduled for 30 July.

Morocco has also started the production of more than 3 million monthly doses of the Chinese Sinopharm vaccine. Monthly output is expected to reach 5 million doses from February and 20 million doses by the end of 2022.

Algeria
Health Minister Abderahmane Benbouzid has urged Algerians to get vaccinated to prevent the country’s healthcare infrastructure from collapsing as it battles both the delta and omicron variants.

“I urge you to get vaccinated and break the chain of infections which risk bringing our health institutions to their knees,” Benbouzid said. “For now, the hospitals’ staff are managing. The question is, how long can they hold on?”

Only about 13 per cent of Algeria’s 45 million residents have been inoculated despite the country reportedly procuring a stock of vaccines sufficient for approximately two years. 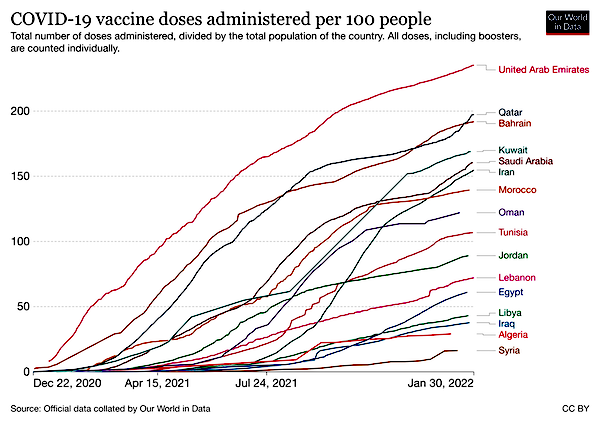