26 July 2021 By Neha Bhatia
Cases have jumped 14.4 per cent in the North African country even as parts of Mena ease curbs

The number of Covid-19 cases in the Middle East and North Africa (Mena) region crossed 10,827,495 on 26 July, according to Worldometers data collated by MEED. 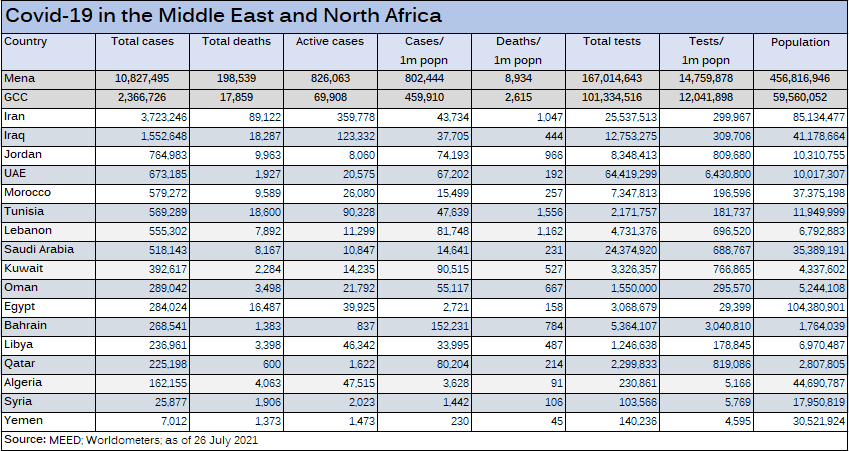 There were 10,923 cases recorded per million people in Tunisia during the four weeks between mid-June and mid-July.

In other parts of the region, governments are advancing procurement measures to grow their vaccine stockpiles as curbs are partially eased for fully vaccinated Mena residents.

Saudi Arabia
Entrance to public spaces such as restaurants, shops, markets and malls will be restricted to fully vaccinated people from 1 August, Riyadh has reiterated. Visitors will be required to show proof of vaccination as well.

From 9 August, travel outside the kingdom will also be permitted only for individuals that have received both doses. Saudi Arabia’s Health Ministry said on 25 July that receiving both doses of a vaccine is the best form of protection against the delta variant of coronavirus that is causing spikes in Covid-19 cases around the world.

UAE
Abu Dhabi is continuing nightly movement restrictions to carry out the National Sterilisation Programme between midnight and 5am daily. The programme was launched ahead of the Eid al-Adha break in the country between 19 and 22 July. All travellers in Abu Dhabi – regardless of their vaccination status – must present negative Covid-19 test results as well.

Capacity restrictions are in place in the UAE capital, with gyms, restaurants, cafes, spas and buses operating at 50 per cent capacity. Shopping malls and cinemas can operate at 40 per cent and 30 per cent of their capacity, respectively.

Bahrain
Indoor events, conferences and sports, and cinemas will be restricted to individuals who received the second dose of a vaccine at least a fortnight beforehand, as well as those who have recovered from Covid-19.

Kuwait
More than 10,000 Covid-19 passports – required for vaccinated individuals planning to travel – are said to have been rejected as expats prepare to return to the country from 1 August, when Kuwait will resume commercial flights.

More than 73,000 residents vaccinated overseas have applied with the health passports, of which 18,500 have been approved, according to reports. Applications have been rejected due to factors such as type of vaccine, incomplete vaccination data or insufficiently verifiable vaccination data.

Expatriates have been barred from travelling to Kuwait since 7 February. Kuwaitis who have received one or both doses of the vaccine have been allowed to travel abroad since 22 May, but from 1 August, only fully vaccinated citizens will be permitted to travel outside the country. More than 30,000 air passengers departed from and returned to Kuwait during the Eid al-Adha holiday. 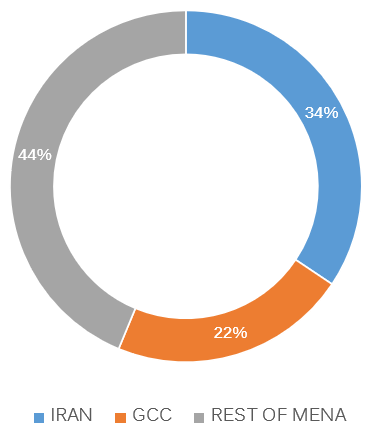 Oman
More than 500,000 doses of Covid-19 vaccines are set to arrive in Oman, according to the sultanate’s Health Ministry, with the shipments expected in the days following the Eid al-Adha break.

Iranian Red Crescent Society’s (IRCS) head, Karim Hemmati, said the country had also received its ninth consignment of vaccines on 25 July. The shipment contains a little under 1.1 million doses and was handed to the Health Ministry for immediate distribution, according to Tasnim News Agency.

Egypt
A shipment of the Russian-made Sputnik V vaccine was sent to Egypt earlier this month as a “gift from the Russian Ministry of Sport” for about 3,000 athletes, with more than half of the quantity reserved for athletes from Egypt. The remaining quantity is to be distributed to athletes from Tunisia and Algeria.

Iraq
Iraq’s hospitals are “almost losing control” over the number of new patients due to Covid-19, director general of public health, Riyad Abdul Amir, said on 20 July, adding that the “coming days will be very dangerous”.

Iraq has ordered about 18 million doses of Covid-19 vaccines, including those made by Oxford-AstraZeneca and Pfizer-BioNTech.

Jordan
Amman has decided to start vaccinating children aged 12 years and older, who may now be given the Pfizer-BioNTech jab with the approval of a guardian. The decision comes as Jordan reopens its economy and eases curbs on gyms, pools and night clubs at hotels.

Lebanon
The Lebanese Vaccine Executive Committee said on 21 July that it would resume administering the Oxford-AstraZeneca vaccine on a walk-in basis to individuals aged between 30 and 40 years.

On 23 July, the committee said it had administered a million doses of Covid-19 vaccines, with the number of centres to administer doses raised to 95 this month from 61 in April.

Weekly vaccine administration capacity has risen from 51,000 in April to 159,000 in July, according to the committee’s unverified Twitter account. 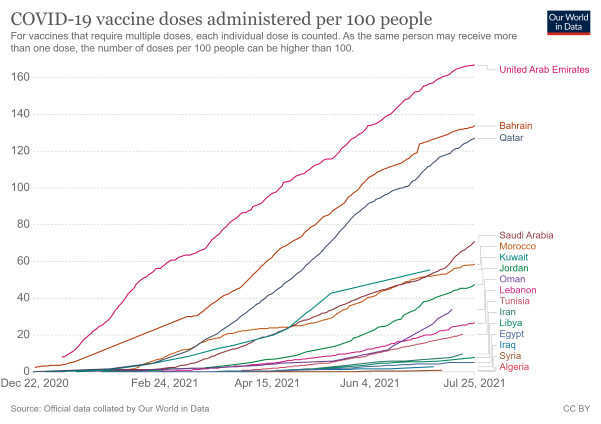 Morocco
Morocco received 2 million doses of the Chinese Sinopharm vaccine on 23 July, and is expected to receive 300,000 doses of the Johnson & Johnson vaccine imminently, according to local media reports. The single-dose vaccine is expected to be used in areas with high infections rates, such as Casablanca, Marrakech and Agadir.

Curbs are in place in Morocco, with a night curfew implemented from 11pm to 4.30am, and cafes and restaurants operating at 50 per cent capacity.

Libya
A temporary vaccination centre has been launched in Tripoli, with the Health Ministry promising an “exceptional” programme to vaccinate the population. The National Centre for Disease Control will carry out the programme under the direct supervision of the ministry. Tripoli received 500,000 doses of Sputnik V earlier this month.

Tunisia
The health department of the Tunisian army has taken over the national inoculation programme following orders by President Kais Saied amid the government’s failure to ramp up vaccination rates in the North African country.

Hichem Mechichi – whom Saied fired as prime minister on 25 July – had attributed Tunisia’s mismanagement of Covid-19 in recent weeks to Faouzi Mehdi, the health minister he sacked last week. Mechichi said Mehdi was responsible for “criminal” decisions – such as opening vaccination centres despite having limited quantities of doses – that led to overcrowding and the slow pace of Tunisia’s vaccination campaign.

The Pasteur Institute of Algeria received 2.4 million doses of Sinovac earlier this month, bringing the total number of the country’s doses of all vaccines – including those from Sputnik V, Sinopharm and Oxford-AstraZeneca – to 6 million, according to local media reports.