The number of Covid-19 cases in the Middle East and North Africa (Mena) region crossed 18,395,601 on 15 February 2022, according to Worldometers data collated by MEED.

Jordan continues to be among the top five countries reporting the highest number of new cases in the region this month. In the week to 15 February, total case numbers in the country jumped 10.3 per cent to reach 1,490,473 from 1,351,733 on 8 February.

Saudi Arabia
Saudi Arabian citizens who did not receive their second Covid-19 vaccine within the past three months must have a booster dose before travelling outside the country under new rules that took effect on 9 February. Individuals travelling to the kingdom must present a Covid-19 test taken 48 hours before departure. Fully vaccinated citizens who test negative will be allowed to enter the country seven days after a positive PCR test without needing to test again.

Citizens who are not fully vaccinated or have received vaccines not approved by the kingdom, and test positive, will be allowed to enter the kingdom 10 days after the date of their positive PCR test.

UAE
Abu Dhabi Public Health Centre says individuals who have received two or three doses of the Sinopharm jab can receive a booster dose of either Sinopharm or Pfizer six months after they received their last dose.

Exemptions for high-risk individuals allow them to receive boosters three months after their last shot.

The UAE is preparing to gradually ease Covid-19 restrictions on activities and events in the country.

“In light of the decline in infection rate and further recovery measures, the country, today, is announcing the cancellation of restrictions on events and activities for various economic, tourism and entertainment facilities, and shopping malls and [public] transportation, to reach their maximum capacities by mid-February,” said Saif al-Dhaheri, official spokesperson for the National Crisis & Emergency Management Authority (NCEMA).

“It was also decided to raise the maximum capacities at social events, including weddings and funerals, and local authorities will determine the numbers of participants allowed.”

The UAE Football Association has raised stadium capacity for spectators to 100 per cent. Entry will only be allowed to those aged 12 and above, whose Alhosn app shows green status, proving that they have received a UAE-approved Covid-19 vaccine, in addition to a negative PCR test result taken less than 96 hours before match day.

Cinemas have also been allowed to operate at full capacity from 15 February under NCEMA rules, but each emirate can modify cinema capacity, easing or tightening procedures as it deems fit.

Bahrain
The National Medical Taskforce for Combatting the Coronavirus has announced the adoption of green alert level precautions from 15 February. The system is based on the daily average number of cases in intensive care. If the rolling average of positive cases in intensive care is 50 or less for 14 days, it is deemed safe to move to the green level. Bahrain had previously moved to the yellow alert level as a precautionary measure.

The green alert level eases Covid-19 precautions in the country, such as a return to 100 per cent capacity for all indoor facilities, including cinemas, playgrounds, entertainment centres, events, conference halls; and public attendance at sports events. Individuals are no longer required to present a Green Shield vaccine pass, but masks will continue to be required indoors.

Kuwait
The Kuwaiti cabinet will lift certain Covid-19 restrictions starting 20 February, including a ban on foreign travel for individuals who are not vaccinated. Unvaccinated individuals must still take a PCR test 72 hours before departing for the country and quarantine for seven days after arrival.

Pre-departure and post-arrival PCR tests and home quarantine will no longer be required for arriving passengers who have received three shots of a Kuwaiti-authorised vaccine. Double-jabbed arrivals will be exempted from the pre-departure PCR test but must quarantine for seven days after entering the country. This quarantine period may end at any time if they present a negative PCR test.

The cabinet agreed to cancel social distancing requirements in mosques, public transport, cinemas, theatres and banquet halls, and end the ban on in-person events such as conferences, training courses, weddings and funerals.

The cabinet cancelled the requirement of weekly PCR tests for unvaccinated students under the age of 16 wishing to attend classes in person.

Public servants will return to work in offices at full capacity from 13 March.

Oman
Oman has updated travel guidelines for people arriving and departing from the country, and all travellers 18 years old and above must have taken two doses of vaccine to enter through the country’s ports. Fully vaccinated individuals must present a negative PCR test prior to departure and take another test upon arrival.

Unvaccinated Omani nationals must take a PCR test upon arrival at the airport, home quarantine for seven days, take another PCR test on the eighth day and quarantine for an additional 10 days if their second PCR test shows a positive result.

Qatar
More than 1 million booster shots have been administered in Qatar as of 12 February. According to health ministry data, about 87.2 per cent of the country’s population has been fully vaccinated against Covid-19 since Qatar started its inoculation drive in December 2020. 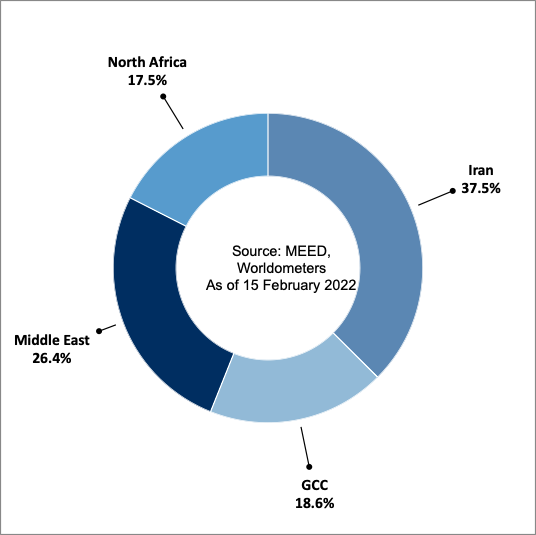 Iran
The Noora vaccine developed and produced by Baqiyatallah University of Medical Sciences, affiliated with the Islamic Revolution Guards Corps, has reportedly completed the third phase of human trials and is awaiting the receipt of an emergency use licence. Noora is a recombinant protein vaccine, and monthly production capacity stands at 3 million doses.

Egypt
Cairo expects to ease Covid-19 restrictions when the country’s vaccination rate reaches 70 per cent, according to local media reports citing Hossam Hosni, chairperson of the Scientific Committee to Combat the Coronavirus Pandemic. Egypt has completed about 30-40 per cent of its vaccination programme so far. About 672,000 citizens had received a booster dose in Egypt as of 10 February.

Syria
The World Health Organisation (WHO) said it is working to support Syria as it aims for a 40 per cent Covid-19 vaccination target by April this year.

Although the total number of Covid-19 vaccines delivered to Syria through the Covax facility and bilateral agreements was sufficient to cover 39 per cent of the population as of 27 January 2022, the percentage of fully vaccinated Syrians remains as low as 5 per cent, according to WHO.

The organisation said vaccinations are now offered in 962 fixed sites, including 39 hospitals and 923 primary healthcare centres. With an additional 1,075 vaccination teams in static locations and 391 mobile teams deployed in all governorates, a total of 5,162 health care workers and over 420 supervisors are operating at maximum capacity.

WHO-supported mobile teams are providing vaccinations at shopping centres, mosques, churches, ministries and the Syrian parliament. Mobile clinics have been stationed close to Immigration Directorates throughout the country. 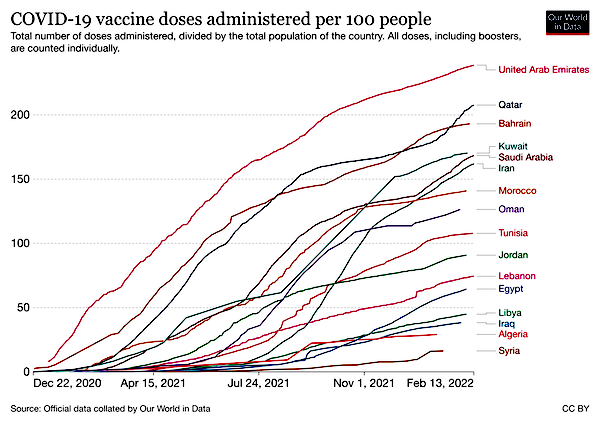