The number of Covid-19 cases in the Middle East and North Africa (Mena) region crossed 14,506,892 on 25 October, according to Worldometers data collated by MEED. 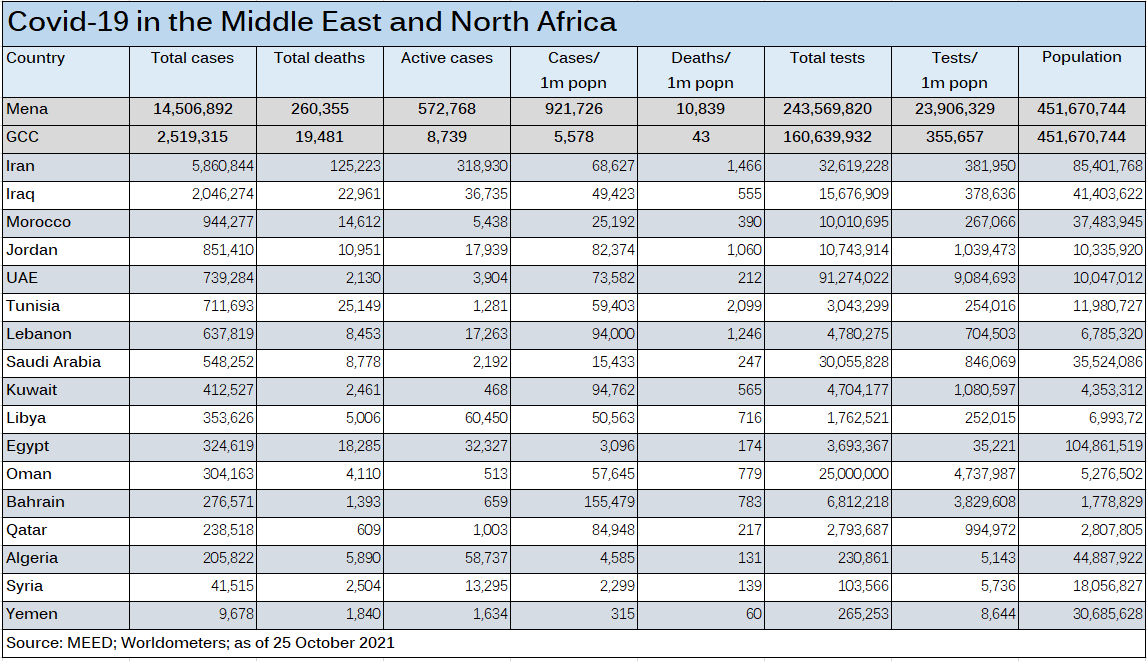 The majority of the 17 countries tracked by MEED reported weekly case growth of under 0.5 per cent. 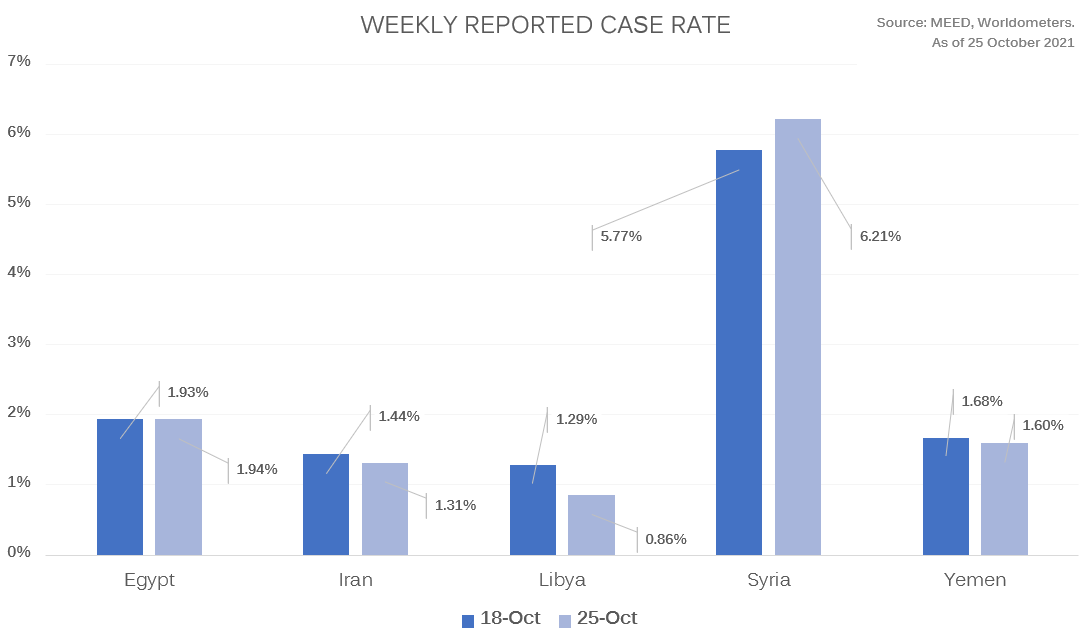 Yemen and Iran noted declines in their weekly case growth rates. In Yemen, the rate declined from 2.52 per cent on 18 October to 1.6 per cent on 25 October. Iran’s rate dropped from 1.4 per cent to 1.3 per cent during the week.

Saudi Arabia
Saudi Arabia’s Education Ministry has postponed the return to in-person classes on 31 October for children aged under 12 years. Students will continue to be taught remotely until further notice, local media reported.

Riyadh also plans to extend residency and visit visas until 30 November for people unable to reach the kingdom due to Covid-19 travel restrictions.

Oman
At least 86 per cent (3 million) of the target population for vaccines in Oman has received one dose of a Covid-19 jab. The number of people who have received both doses stands at 2.6 million, or 73 per cent of the target.

Kuwait
Kuwait has lifted all Covid-19 restrictions for vaccinated people, according to Prime Minister Sheikh Sabah Khaled al-Hamad al-Sabah. Social distancing restrictions between worshippers in mosques were dropped from 22 October, and Kuwait International airport was allowed to resume at full capacity from 24 October.

The latest ease on curbs includes allowing conferences, weddings and social events, with attendance limited to individuals who have received both doses of a Covid-19 vaccine. Visas may also start to be issued for fully vaccinated people. Wearing masks is mandated indoors, but people may remove masks outdoors.

Iran
A sixth major wave of Covid-19 infections is expected in Iran despite the growing pace of the country’s inoculation programme. Health Minister Bahram Einollahi reportedly said last week it is “certain” Iran will face a surge in cases next month, but added that hospitals are “now ready in terms of medicine and oxygen equipment so we can fight it”. 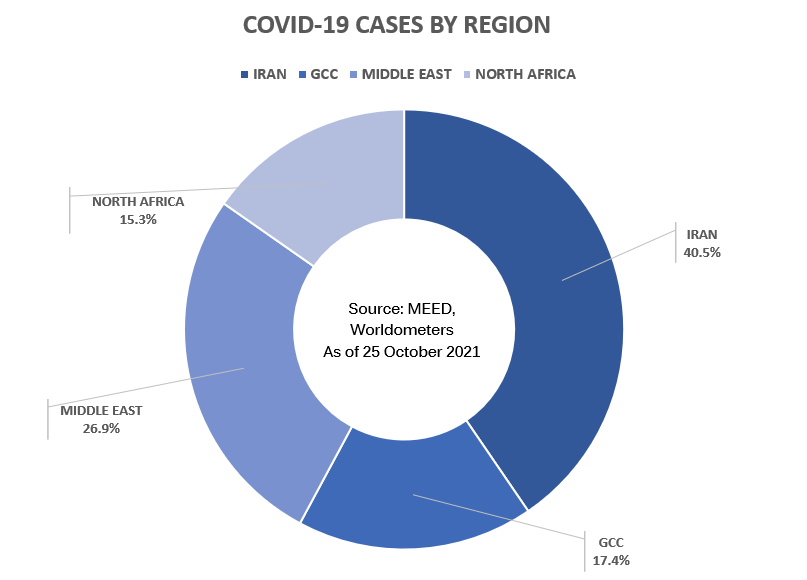 Egypt
Egypt received its third shipment in as many weeks of the Pfizer-BioNTech vaccine last week. Received in Cairo, the delivery comprises 1.4 million doses and is part of the US’ donation of 500 million doses to African Union countries through Covax.

The US has committed to supply more than 8 million doses of the Pfizer-BioNTech vaccine to Egypt and has provided more than 4.6 million of these doses to date. Cairo is also scheduled to receive a third batch of Johnson & Johnson vaccines, comprising 1 million doses, on 25 October.

Morocco
Rabat has suspended all flights to and from the UK, Germany and the Netherlands as infection rates grow in the European countries. The decision came after the Moroccan Health Ministry warned of a surge in cases last week and stated the need to avoid “a possible relapse of serious and critical cases, and Covid-19 related deaths, which have occurred in several European countries”.

Libya
The National Centre for Disease Control has reportedly mandated full vaccination for entry to institutions and state-related transactions in Libya. An electronic card will be launched to provide proof of immunisation. Hayder al-Sayeh, head of the centre, said a fourth wave of the virus is expected in Libya early in 2022.

Tunisia
Covid-19 vaccine passes have been mandated for Tunisians and foreign visitors, including officials and employees, who must show the pass as vaccination proof to access public and private administrations. The pass will also be required at cafés, restaurants, hotels and tourism establishments and used to travel abroad. Foreign visitors who present a vaccination certificate upon arrival will be given the pass. 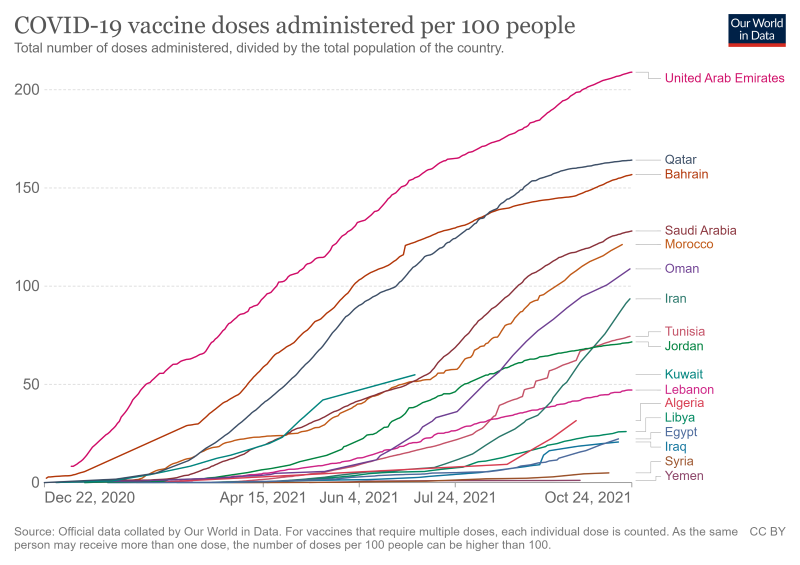