The number of Covid-19 cases in the Middle East and North Africa (Mena) region crossed 14,815,082 on 15 November, according to Worldometers data collated by MEED. 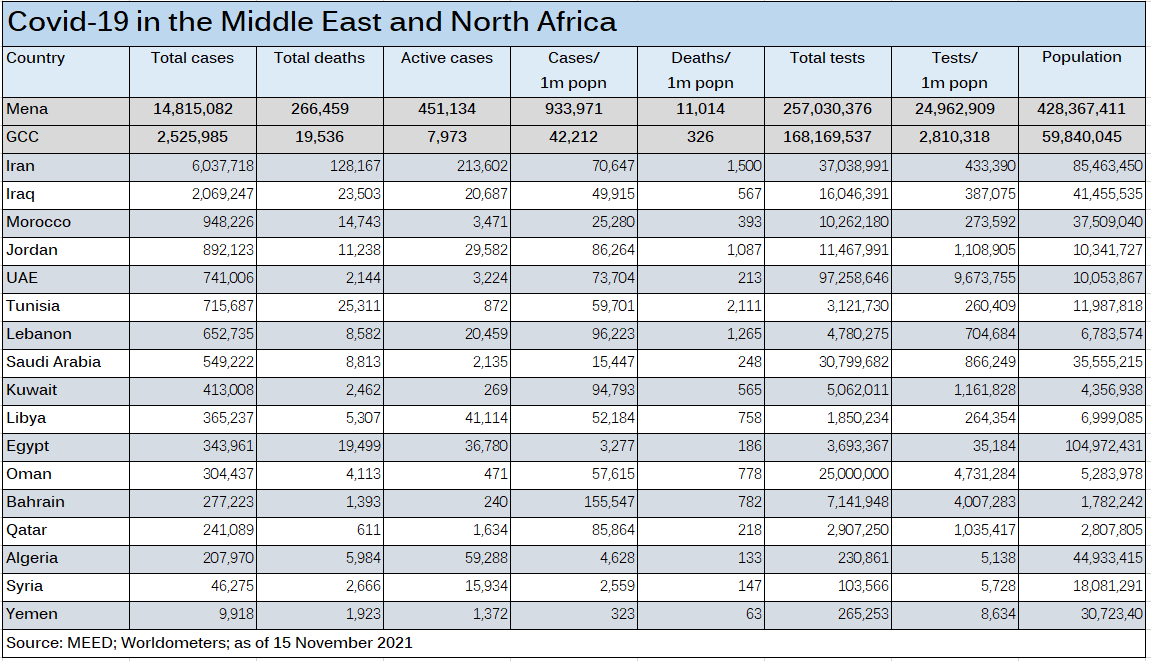 Since 7 November, 110,712 new cases have been reported in the 17 Mena countries tracked by MEED.

Syria’s rate of weekly new cases was 4.72 per cent on 15 November compared to 2.42 per cent on 7 November, indicating that cases are surging in the war-torn country.

Saudi Arabia
Saudi Arabia’s Food & Drug Authority has approved the use of the Pfizer-BioNTech vaccine for children aged 5-11 years. More than 46 million doses of Covid-19 vaccines have been administered to date in the kingdom, with more than 70 per cent of the population receiving both doses of a vaccine.

Bahrain
Bahrain has suspended the use of the ‘red list’ restricting travel from high-risk countries. The red list included 16 countries from which travel was barred except for citizens and residents, who were required to quarantine. Manama has also dropped the requirement for unvaccinated travellers to quarantine in licensed areas and will allow people to isolate at home.

The country’s National Health Regulatory Authority has also approved the emergency use of the Covaxin jab developed by India’s Bharat Biotech.

Oman
Booster shots of the Pfizer-BioNTech vaccine are being administered to high-risk individuals who have completed a two-dose schedule of the vaccine at least eight months ago. This stipulation includes individuals aged 65 years and older, frontline and healthcare workers aged 50 years and older, and people aged over 18 who suffer from chronic health conditions.

Qatar
The public health ministry said individuals who received the second dose of a Covid-19 vaccine six months ago are eligible for a booster shot, regardless of their age. 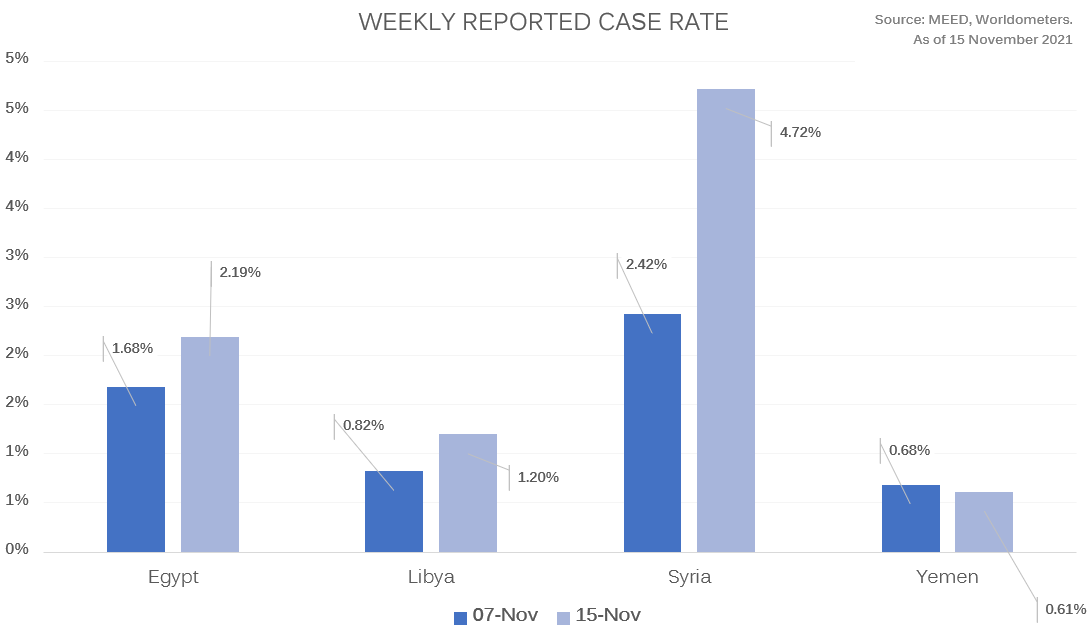 Iran
The locally made Coviran Barekat vaccine has been licensed to start clinical trials on children aged between 12 and 18. Trials will begin on 60 volunteers in the first phase. If the tests prove successful, then children aged 6 to 12 years will also be invited for trials, local media cited Minoo Mohraz, a member of Iran’s Covid-19 committee, as saying.

Egypt
Egypt will run clinical trials on the locally developed Covivax jab, with early tests to begin with tens of people. The pool will eventually number in the thousands. The trials come as Egypt has started to administer vaccines inside subway stations to vaccinate large groups of people. Mobile clinics are also planned to be installed in malls. 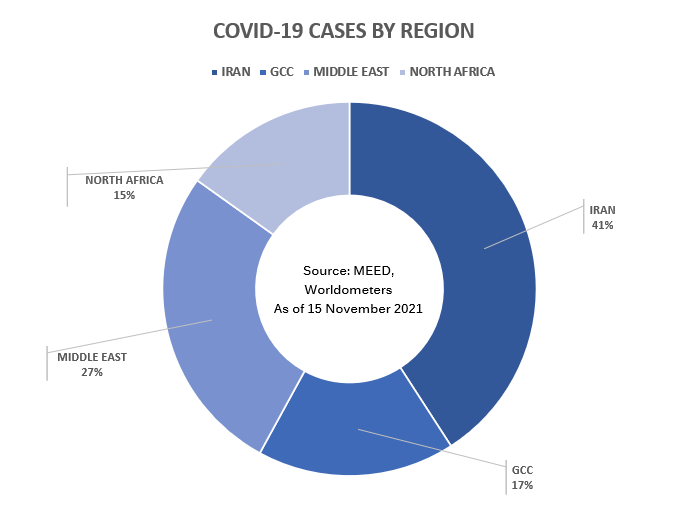 Iraq
The World Health Organisation partnered with Iraq’s health ministry to launch a mass vaccination campaign in Kurdistan last week. The campaign is expected to cover over 12 million people and continue until 31 December.

The health ministry has recommended vaccine types are not changed during the booster stage unless the first two doses caused complications.

Morocco
Morocco will conduct rapid PCR tests at its ports as Covid-19 cases surge in Europe, in addition to continuing its existing requirement of a negative PCR test taken 48 hours prior to departure. Passengers travelling to Morocco must also show proof of vaccination.

Syria
China has donated 500,000 doses of Covid-19 vaccines to Syria after sending 1.3 million doses of Sinovac to Damascus during the prior week. The latest batch comprised Sinopharm vaccines, according to media reports, and raised the total number of Sinopharm doses sent to Syria from China to 800,000. 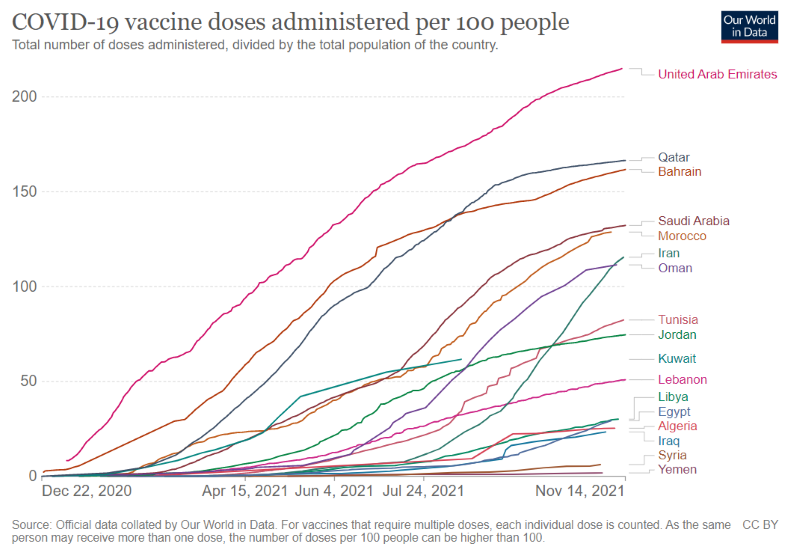