The number of Covid-19 cases in the Middle East and North Africa (Mena) region crossed 14,994,032 on 29 November, according to Worldometers data collated by MEED. 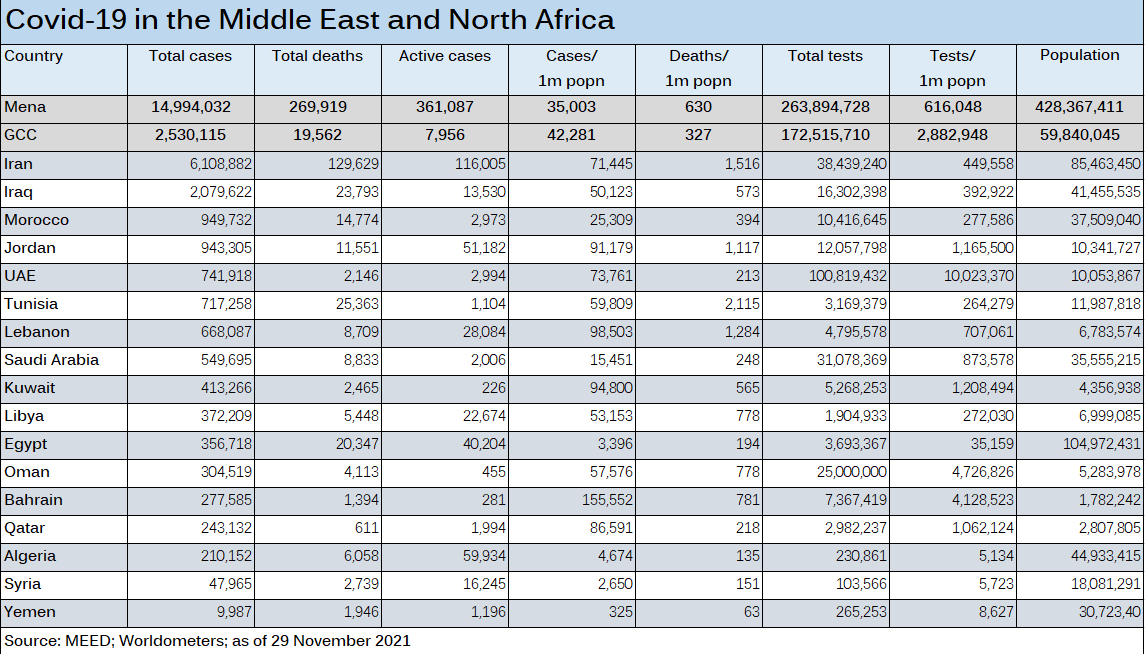 Since 22 November, 90,393 new cases have been reported in the 17 Mena countries tracked by MEED.

In the past week, Gulf nations have reimposed travel bans to contain the spread of Omicron, the new coronavirus variant first detected in South Africa.

Cases of Covid-19 caused by Omicron have also been discovered in Belgium and Botswana.

The emergence of the Omicron variant has renewed concerns about the potential return of long-term flight bans and travel closures that rocked the travel industry in 2020 and the first half of 2021.

The World Health Organisation designated the B.11.529 Covid-19 mutation as a “variant of concern” following an emergency meeting on 26 November and named it Omicron. 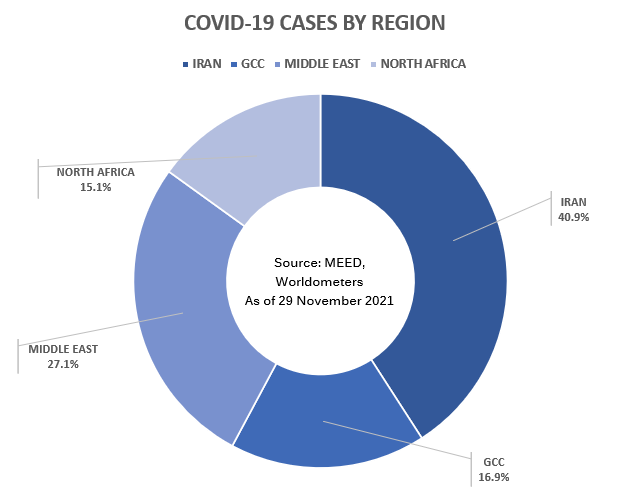 “This variant has a large number of mutations, some of which are concerning,” the WHO said.

“Preliminary evidence suggests an increased risk of reinfection with this variant, as compared to other [variants of concern].”

On 25 November, the kingdom said passengers from Indonesia, Pakistan, India, Egypt, Brazil and Vietnam would be allowed direct entry without spending a 14-day quarantine in a third country. Instead, passengers from these countries will need to quarantine for five days, regardless of their immunisation status outside the kingdom. The decision will be effective from 1 December.

From 4 December, Saudi Arabia will also permit direct entry for passengers from all countries provided they have received at least one dose of a Covid-19 vaccine inside Saudi Arabia, according to state news agency Spa.

UAE
Emirates has issued travel restrictions on seven countries in Africa amid the Omicron variant’s emergence. All travellers departing from or transiting Botswana, Eswatini, Lesotho, Mozambique, Namibia, Zimbabwe and South Africa will not be accepted for travel into Dubai from 27 November until further notice.

This includes suspending the entry of travellers who were in these countries 14 days before coming to the UAE. Flight operations will continue to transport passengers from the UAE to these seven countries.

Individuals travelling from the African countries via transit must stay in those countries for at least 14 days before entering the UAE. Citizens are banned from travelling to the countries except for emergency treatment cases, as part of official delegations and on scholarships.

UAE nationals, diplomatic missions, official delegations between the UAE and the seven countries, and golden visa holders are excluded from this decision. They must present a negative Covid-19 test obtained within 48 hours of departure, a Rapid-PCR test at the airport within six hours of departure, and another PCR test at the airport when arriving in the UAE.

A 10-day quarantine and a PCR test on the ninth day of entering the country are required for the excluded category. Official delegations must quarantine at the airport until the test result is received to continue their mission in the UAE without the quarantine.

Bahrain
Bahrain’s Civil Aviation Affairs has updated the country’s red list for travel to include Malawi, Mozambique, Angola and Zambia in response to the Omicron variant.

Passengers from red list countries, including those who have transited through their airports, are prohibited from entry unless they are citizens or residents of Bahrain. Other countries on Bahrain’s red list are Namibia, Botswana, Zimbabwe, Lesotho and Eswatini, according to state news agency BNA.

Kuwait
Kuwait has suspended direct flights from nine African countries from 28 November, but cargo flights will not be affected.

Entry is suspended for direct and transit travellers unless they have spent 14 days in another destination before entering Kuwait. Kuwaiti nationals returning from these countries should undergo an institutional quarantine of seven days.

Oman
Oman has suspended entry to travellers from South Africa, Namibia, Botswana, Zimbabwe, Mozambique, Lesotho and Eswatini, but the ban does not affect the sultanate’s citizens, diplomats and health workers.

Qatar
Qatar Airways said on 27 November it would no longer accept passengers travelling from five Southern African countries in its global network, including Luanda, Maputo, Johannesburg, Cape Town, Durban, Lusaka and Harare. The airline said that passengers for travel into these countries will continue to be accepted in line with current restrictions.

On 22 November, it was announced that the Qatar Fund for Development had donated $10m and signed an agreement with the Gavi vaccine alliance to enhance equitable access to inoculation in lower-income countries. The agreement will help zero-dose children – those who have yet to receive a single dose of a basic routine vaccine – get access to immunisation services. 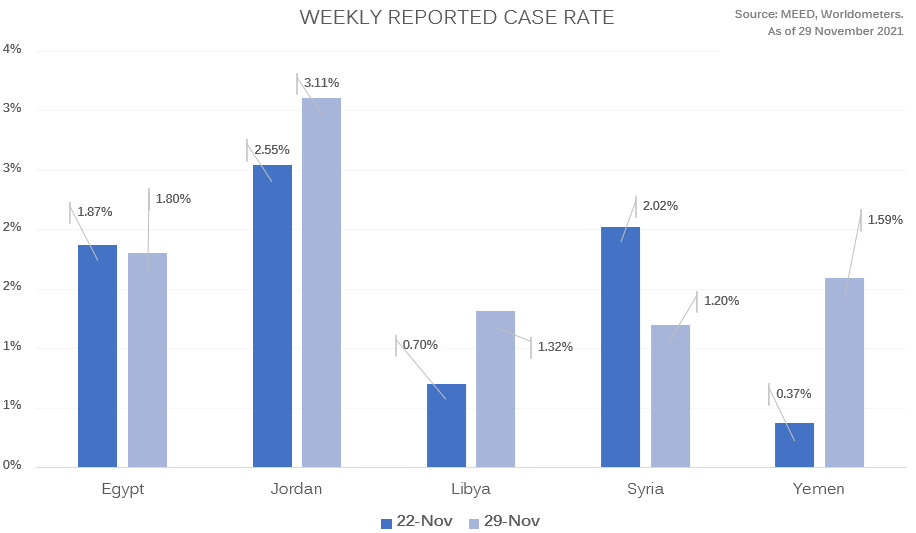 Last week, Iran started phases one and two trials of the Coviran Barekat vaccine on children aged 12-18 years. The local vaccine was unveiled in December 2020 and was granted a license for public use this June.

Iran’s decision to block vaccine imports comes as the country rolls out a requirement for visitors to either provide proof of vaccination or a negative PCR test to enter the country, local media reported citing an official from the Imam Khomeini International airport city and Health Ministry guidelines. Non-Iranian travellers aged 12 and above must show a negative PCR test result taken 96 hours before arrival along with a certificate to prove complete vaccination.

Egypt
The Health and Population Ministry has received 3.98 million doses of Pfizer-BioNTech’s Covid-19 vaccine through the Covax and Gavi alliance. The consignment, which arrived at Cairo International airport on 27 November, is the second to arrive in the country in the past week.

Cairo received 3,688,500 doses of the Oxford-AstraZeneca and Johnson & Johnson vaccines on 24 November. The vaccine consignments come as Egypt prepares to offer booster shots of vaccines to the elderly, medical teams and immunocompromised groups.

Jordan
Prime Minister Bisher al-Khasawneh issued an order on 25 November regulating entry to public and private institutions, with employees to be barred access to their work premises unless they have received two shots of a Covid-19 vaccine. The days they are barred from work will be deducted from their annual leave, and unpaid leave used in cases where annual leave days are exhausted.

Individuals aged over 18 years may not visit any ministry, public department or private sector institutions unless they are fully vaccinated. Employees who allow entry in violation of either of these laws will face penalties. Private sector entities violating these rules will be closed for one week for the first time and two weeks for a repeat violation.

Other institutions face fines of JD100, JD200 and JD300 for first-, second- and third-time violations, and a one-week closure for repeat violations after that, local media reported. The provisions of these orders do not apply to individuals exempted from vaccination due to medical reasons.

Morocco
Rabat has decided to halt incoming passenger flights for two weeks from 29 November amid the spread of the Omicron variant of the coronavirus. The committee overseeing Morocco’s response to Covid-19 said the measure has been taken as Omicron quickly spreads in Europe and Africa, and will be regularly evaluated for necessary adjustments. 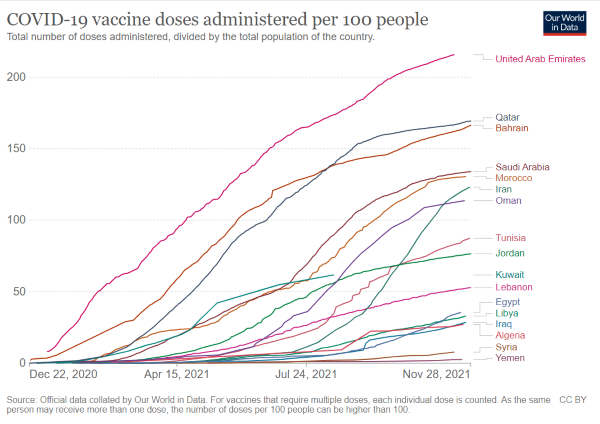 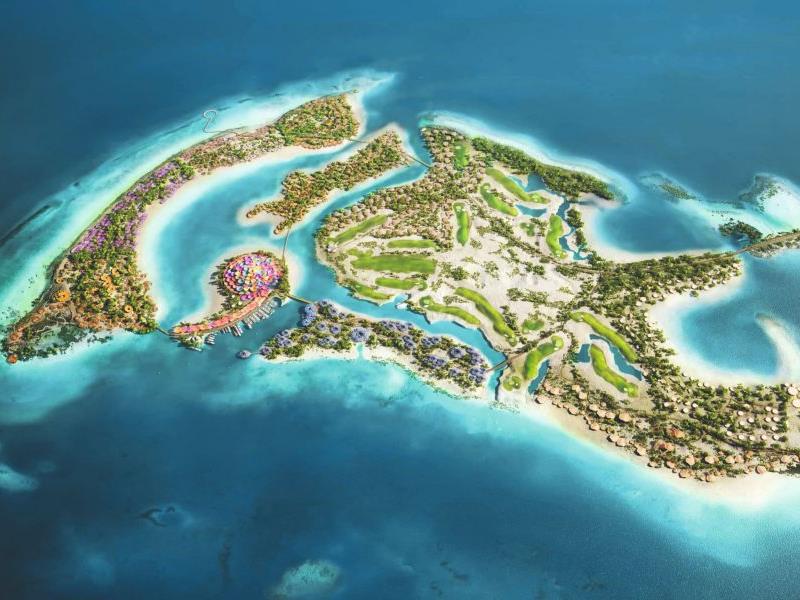