08 March 2022 By Neha Bhatia
More than 19.1 million infections have been confirmed since the start of the pandemic

The number of Covid-19 cases in the Middle East and North Africa (Mena) region reached 19,140,378 on 8 March, according to Worldometers data collated by MEED. 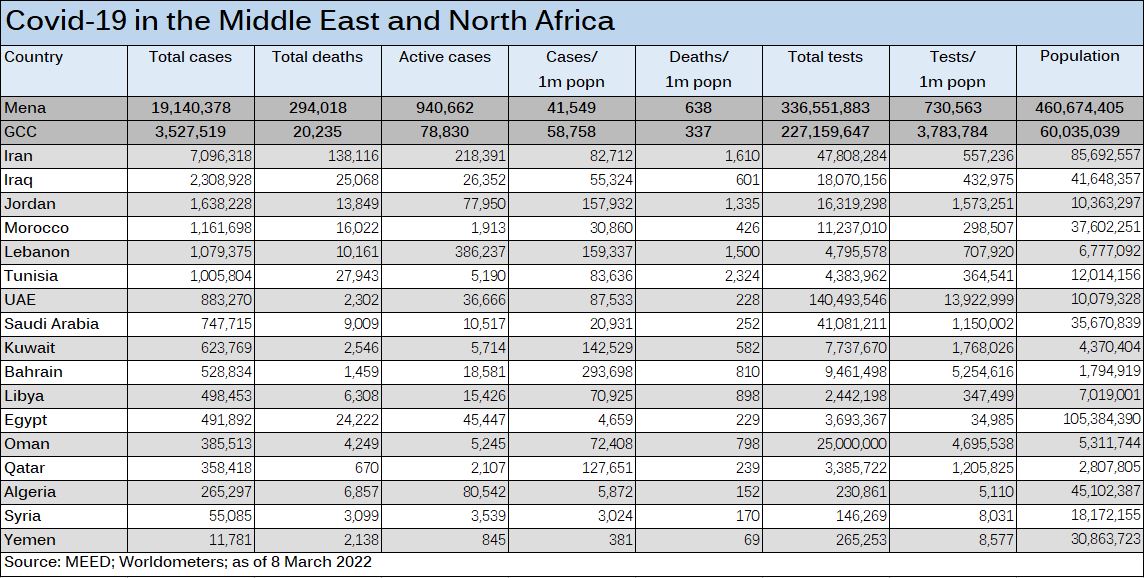 Saudi Arabia
Saudi Arabia has lifted Covid-19 mandates and flight restrictions, citing progress made in the national vaccination programme and high immunity rates. PCR and rapid antigen tests are no longer required from passengers arriving in the kingdom, and quarantine on arrival requirements have also been lifted. Passengers on visit visas must have travel insurance to cover the cost of treatment should they catch Covid-19 during their stay.

Pilgrims are no longer required to book prayer slots for the two holy mosques, but those who want to perform Umrah or pray in the Rawdah must book appointments through the Eatmarna or Tawakkalna apps. The latter app is still required to enter offices, some public and private buildings, airports and public transport vehicles.

UAE
Recently updated rules for people entering the country by air also apply to arrivals via the country’s land borders. New rules remove the requirement for PCR tests for fully vaccinated travellers, with only a vaccine certificate necessary on arrival. The national committee to combat Covid-19 advised travellers arriving at land ports to undergo a PCR test within 24 hours of arriving in the UAE, specifically for individuals who plan to stay for over 72 hours.

Bahrain
Bahrain has granted emergency approval to the French Valneva’s Covid-19 vaccine, with the first shipments of the jab expected to reach the country at the end of March. Manama signed a deal to purchase 1 million doses of the vaccine in December. Valneva’s VLA2001 vaccine is understood to be the only whole-virus, inactivated, adjuvanted Covid-19 vaccine in clinical development in Europe. 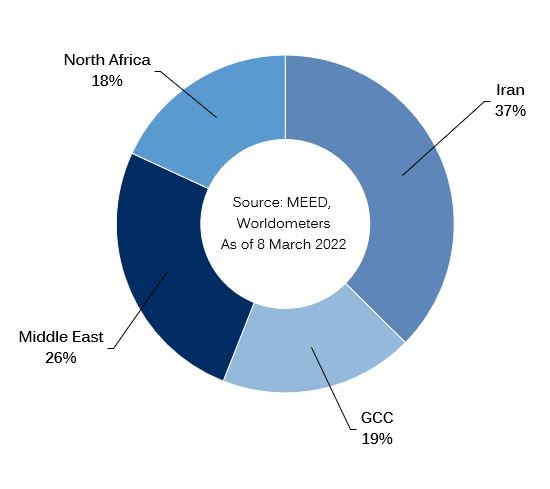 Iran
Coviran Plus, Iran's vaccine that is developing against the Omicron strain, has entered the human trials phase with 210 volunteers. Minoo Mohraz, a member of Iran’s National Scientific Committee of Covid-19, said the study’s results will be provided to the health ministry in two weeks. The original Coviran Barekat vaccine was launched in December 2020 and licensed for public use in June. More than 60 million doses of Coviran have been produced so far.

The Noora vaccine developed and produced by Iran’s Baqiyatallah University of Medical Sciences has also received an emergency use licence. It is the sixth locally developed Covid-19 vaccine to obtain such permits.

Egypt
Clinical trials of Egypt’s locally developed Egyvax Covid-19 vaccine are due to begin. The country has also announced new regulations for vaccinations, with second doses available at all centres. Booster doses can also be taken at any vaccine centre unless the individual has been specifically instructed to visit a particular location via SMS. Boosters are available three and six months after the second dose has been administered to individuals aged over and under 65 years, respectively.

Iraq
The government in Iraq will start easing Covid restrictions for travellers departing from and arriving in the country. New measures due to take effect on 1 April will remove the mandate for a PCR test for vaccinated passengers, with only a Covid-19 vaccine certificate required instead. Individuals who cannot take a vaccine due to health reasons must present a health ministry-certified medical report and a negative PCR test to travel.

Algeria
Director general of Pasteur Institute of Algeria, Fawzi Derrar, has said individuals must continue to receive vaccination despite improvements in the local epidemiological situation.

“It is clear that [the situation is improving] given the weakening of the virus, but we must continue to be vaccinated to avoid serious scenarios for the next cold seasons,” Derrar said.

“We are seeing an adaptation in the strains of the virus, which suggests that we will probably have a seasonal virus, and as such the unvaccinated subjects are likely to pay a heavy price in the event that there is a new wave caused by a new variant.” 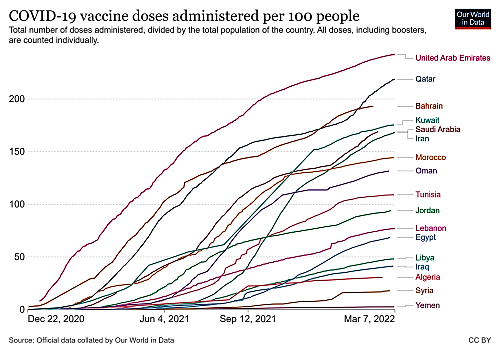