"The severity of the shortage of new supply, combined with insatiable international demand has driven prime residential prices up by an extraordinary 70.3 per cent in the last 12 months," says Faisal Durrani, head of Middle East research at Knight Frank.

Insights from the consultancy highlight that across the three communities, only eight new villas are currently under construction and will be delivered between 2023 and 2025. 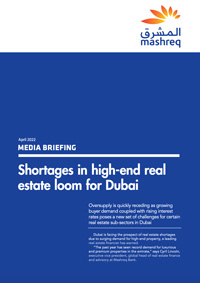 "The caveat to this stellar growth is that average transacted prices in these exclusive precincts stands at AED2,900 per-square-foot, or $800, making Dubai one of the most ‘affordable’ luxury residential markets in the world," explains Durrani. "It is in fact four times cheaper than prime neighbourhoods in New York, or London."

Residential values have continued to rise across Dubai in recent months, and are now 10 per cent higher when compared to a similar period in 2021.

"Nonetheless, the mainstream market has seen growth of 10.1 per cent in the last 12 months, with villas continuing to lead the charge," says Durrani. "In fact, villa values are now 19.3 per cent higher than this time last year. The emerging tone for pricing is one of less steep rises."

Key price highlights
Palm Jumeirah: Villa prices have grown by 51 per cent in the last 12 months and by 68 per cent since the onset of the Covid-19 pandemic
District One and Dubai Hills Estate: Prices for villas have grown by 30 per cent over the past 12 months

On the rental front, growth has kept pace with capital value increases, resulting in no yield compression.

On average, rental yields for apartments and villas in Dubai hover around 6 per cent and 4 per cent, respectively, though these figures are significantly higher in areas where demand for short term rentals is high.