The number of Covid-19 cases in the Middle East and North Africa (Mena) region crossed 13,823,986 on 20 September, according to Worldometers data collated by MEED.

Since 13 September, 214,868 new cases have been reported in the 17 Mena countries tracked by MEED.

Syria, Yemen and Iran continue to register the highest number of new cases this week, with growth rates of 4.1 per cent, 3 per cent and 2.4 per cent, respectively. 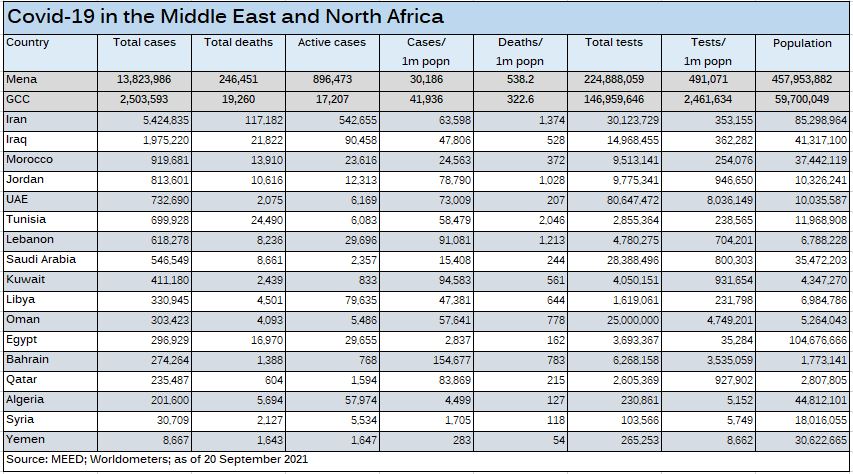 Since 1 August, the total number of Covid-19 cases in northwest Syria has more than doubled, and daily case numbers have increased 10-fold, but the region had only a two-week supply of testing kits remaining as of mid-September.

The next batch is not expected to be delivered for at least a month, and IRC said oxygen supplies are reaching “critically low levels”.

IRC’s country director for Syria, Tanya Evans, said some patients are being turned away from community treatment centres or being admitted to non-Covid hospitals, further increasing health risks.

“More testing kits and more oxygen supplies are urgently needed to address the current shortages, and cross-border access is the only route to secure that,” Evans added.

“It is imperative that cross-border access is maintained and expanded and that the Covid and the humanitarian response as a whole are properly funded. Syria has received a mere 27 per cent of the required funds so far this year – a major drop from previous years – and the health cluster is less than 12 per cent funded.”

Saudi Arabia
Vaccination rates among students aged 12 years and older have reached 90.5 per cent, the Saudi education ministry announced. For teachers and education staff, the rate stands at 97 per cent. The kingdom’s General Authority of Civil Aviation has also issued new regulations for travellers from countries not on Saudi Arabia’s ‘red list’ of banned countries.

An unvaccinated individual or someone who has received only one dose of the approved vaccines in the kingdom must submit a negative Covid-19 PCR test taken no more than 72 hours before departure, and undergo institutional quarantine for five days.

Individuals vaccinated with jabs not approved in Saudi Arabia must take two PCR tests – one on the day of landing in the kingdom and another on day five of their institutional quarantine, which ends if the second test result is negative.

UAE
Abu Dhabi has suspended testing requirements for entry to the city starting 19 September, with individuals no longer required to submit negative Covid-19 test results to enter the UAE capital. The committee has also approved home quarantine without wristband trackers for international travellers and individuals who have been in contact with positive cases.

In Dubai, organisers of Expo 2020 clarified that visitors must show evidence of having received a Covid-19 vaccine, or a negative PCR test taken in the past 72 hours, to access the event. UAE residents can use digital or paper vaccine certificates or the Al-Hosn app to show proof of vaccination, and tourists can use the app by uploading their international vaccine certificate information.

Oman
The Health Ministry has reduced the waiting period between the first and second doses of Covid-19 vaccines to four weeks instead of six, with people in target segments urged to book second dose appointments through its Tarassud+ app.

Friday prayers are planned to resume from 24 September for people who have received at least one dose of a vaccine. Mosques will reopen at 50 per cent capacity and social distancing measures will be in effect. Social and sports events will also resume for those who have received the first dose of a Covid-19 vaccine.

Kuwait
Unvaccinated expatriates aged 18 years or younger who hold a valid residency permit can enter Kuwait in a one-off decision by the Directorate General of Civil Aviation. Local media reported that these individuals must go into quarantine upon arrival in Kuwait and sign a written pledge to get vaccinated once in the country.

Iran
Tehran has approved the use of US firm Johnson & Johnson’s Covid-19 vaccine as it battles with a fifth wave of the coronavirus. Supreme Leader Ayatollah Ali Khamenei had banned imports of vaccines made by the US and Britain earlier this year, but Iran continued to accept Western-developed vaccines manufactured elsewhere. 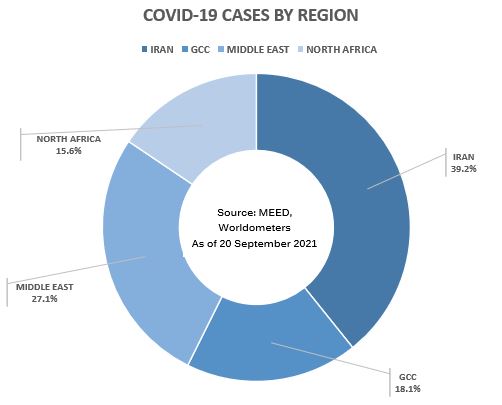 Egypt
Health Minister Hala Zayed said last week that Egypt is preparing to distribute the Pfizer vaccine across the country, with 12 large-capacity and eight medium-capacity freezers allocated to various governorates. Six refrigerators will also be installed at the National Serum & Vaccine Complex in Helwan.

Cairo expects to receive 17 million doses of internationally made vaccines between 11 and 30 September, including those developed by Oxford-AstraZeneca, Sinovac, Sinopharm, Johnson & Johnson, Moderna, Pfizer and Sputnik, according to local media. Five million Sinopharm doses are also expected.

Two tranches of a combined 546,400 doses of the Oxford-AstraZeneca jab arrived from France through the Covax facility over the weekend and will be shipped to 781 vaccine centres in the country.

Jordan
Pfizer and BioNTech plan to donate 200,000 doses of their vaccine to Jordan this year. Another shipment of 50,000 doses to replenish its stockpile is expected in October. 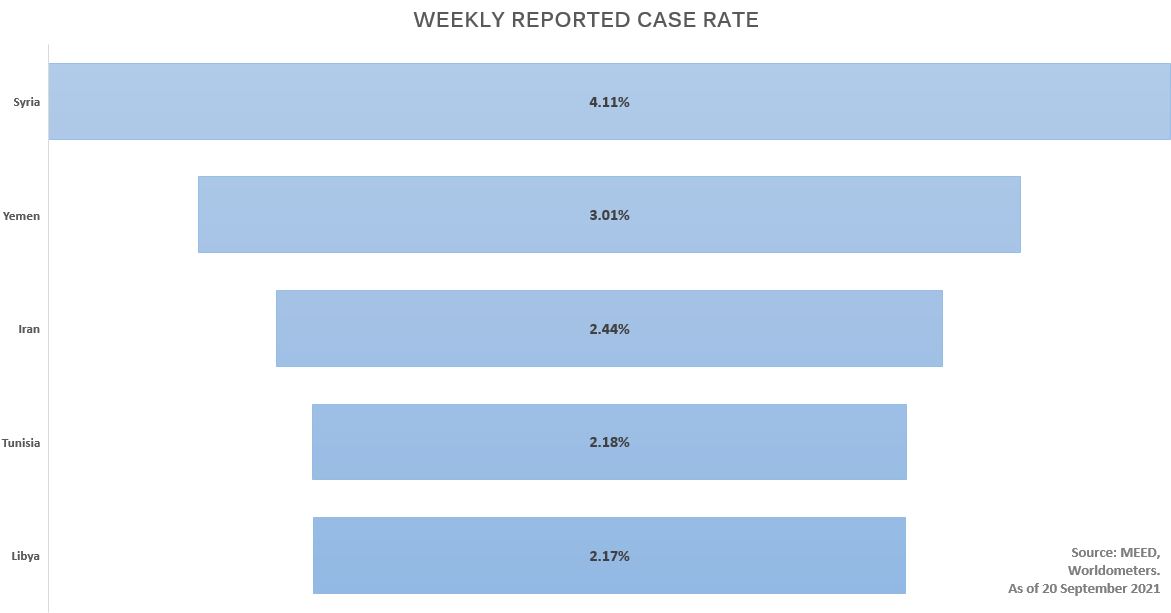 Lebanon
Rafic Hariri International airport received a shipment of 100,000 doses of the Pfizer-BioNTech vaccine last week. In total, Lebanon is expected to receive a donation of 600,000 jabs from Pfizer and BioNTech this year.

Pfizer’s Middle East and Africa regional president, Patrick van der Loo, reportedly said that Jordan and Lebanon have “set an excellent example of how an efficient and effective national immunisation programme provides for all people across a diverse population, especially the poor and the vulnerable”.

Tunisia
Tunis has reopened its shared border with Libya two months after it was closed amid a summer spike in Covid-19 cases. The border was reopened on the Tunisian side following orders issued by President Kais Saied. Tunis and Tripoli agreed on a health protocol subject to revision in light of the situation in both countries, and the reopening will be reviewed in cases of violations.

The health protocol to be followed, according to Libyan media, includes quarantine for single-dose or unvaccinated individuals and the provision of negative PCR test results, as well as mandatory quarantine. 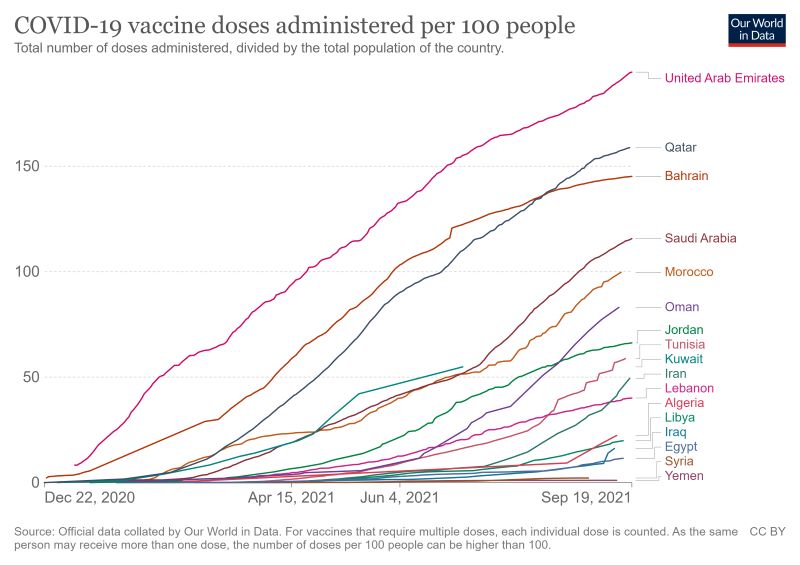 Algeria
The first batch of the Algerian-made Covid-19 vaccine Coronavac will begin at the Constantine premises of the local Saidal healthcare group on 29 September. Pharmaceutical Industry Minister Abderrahmane Lotfi Djamel Benbahmed said production forecasts for the fourth quarter include raising output by 1 million a month to reach 3 million by December.

By January, it is expected that 5.3 million doses of Coronavac – to be developed in cooperation with China’s Sinovac – will be produced at Saidal’s production facility. Benbahmed said Algeria could produce 200 million doses a year at Saidal’s unit.

Syria
A second wave of Covid-19 has hit Idlib in northwest Syria. Supplies of test kits and oxygen are running low as daily case numbers reach record highs. Idlib borders Turkey and is home to more than 3 million people.

About 877 deaths have been reported in the Idlib region since the start of the pandemic, but data collection and vaccination numbers are understood to be skewed due to the humanitarian and conflict situations in the country.