13 September 2021 By Neha Bhatia
Regional case growth is on a downward trend even as Yemen, Syria and Iran record new cases more quickly

The number of Covid-19 cases in the Middle East and North Africa (Mena) region crossed 13,609,118 on 13 September, according to Worldometers data collated by MEED. 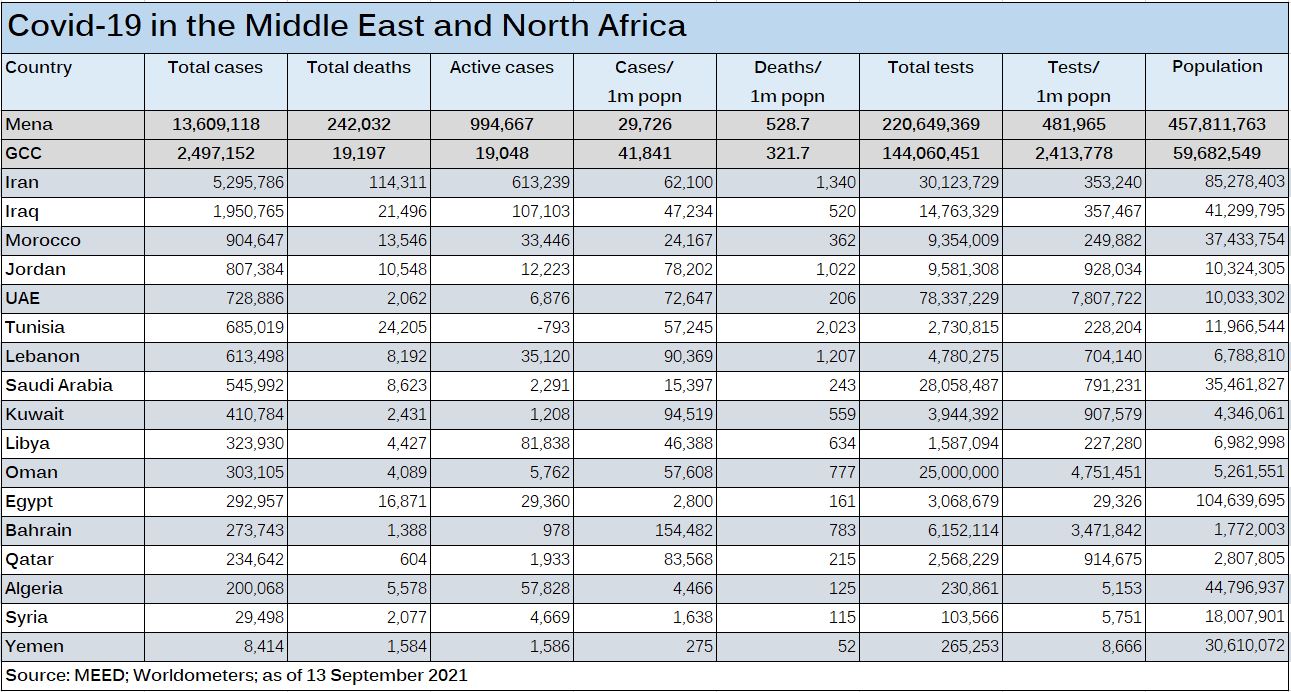 Since 6 September, 267,408 new cases have been reported in the 17 Mena countries tracked by MEED.

The total tally grew by an unchanged 2 per cent from last week to reach 13.6 million as of 13 September, but the number of new cases recorded in the week since 6 September is 3.83 per cent lower than last week’s 278,054 week-on-week case spike.

This indicates that even as infection numbers continue to grow in hard-hit countries such as Yemen, Syria and Iran, case growth is slowing in other parts of the Mena region.

Saudi Arabia
The validity of iqamas and visit, exit and re-entry visas will be automatically extended free of charge until 30 November. The decision applies to Saudi residents stranded in countries where travel to the kingdom is suspended. It comes after Saudi Arabia removed the UAE, alongside Argentina and South Africa, from its list of banned travel markets.

Citizens were reallowed to travel to the countries as part of the decision, announced on 8 September.

UAE
Emirati students in public schools in Dubai will be provided free Covid-19 screening at Dubai Health Authority facilities. The move is expected to help students aged 12 and above who are unvaccinated and must take PCR tests each week to be allowed to sit in the classroom. Monthly PCR tests have also been mandated for unvaccinated and vaccinated students.

The Federal Authority for Identity and Citizenship and the National Emergency Crisis and Disasters Management Authority said on 10 September that fully vaccinated passengers from countries previously on the suspended list with residence visas will be allowed to travel to Abu Dhabi. 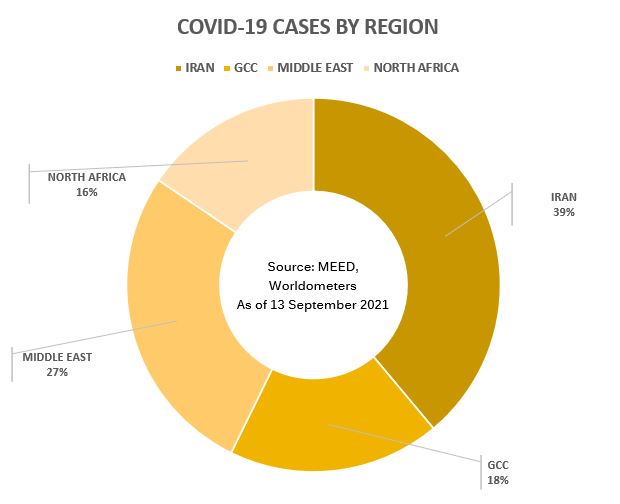 Oman
Case numbers have sharply dropped in the sultanate as the epidemiological situation improves following lockdowns to curb the pandemic. Ahmed Mohammed al-Saeedi, Oman’s health minister, said on 9 September that the positive case rate in the country had dropped to 1 per cent from a previous average of 25 per cent. New vaccination centres opened in the North al-Batinah governorate last week. Student inoculation programmes are also continuing.

Qatar
Booster shots of the Pfizer-BioNTech and Moderna vaccines will be given to high-risk individuals in Qatar from 15 September. Recipients must have received the second dose of their vaccine more than eight months ago.

Iran
Companies from Iran and Australia are jointly working on a coronavirus vaccine that is expected to become available this month, with the jab undergoing third phase trials. Haleh Hamedifar, a member of the Syndicate of Iranian Human Medicines Industries’ board, said first phase trials were conducted in Australia. She hoped the first batch of the vaccine, named Spicogen, would be available by end-September, local media reported. 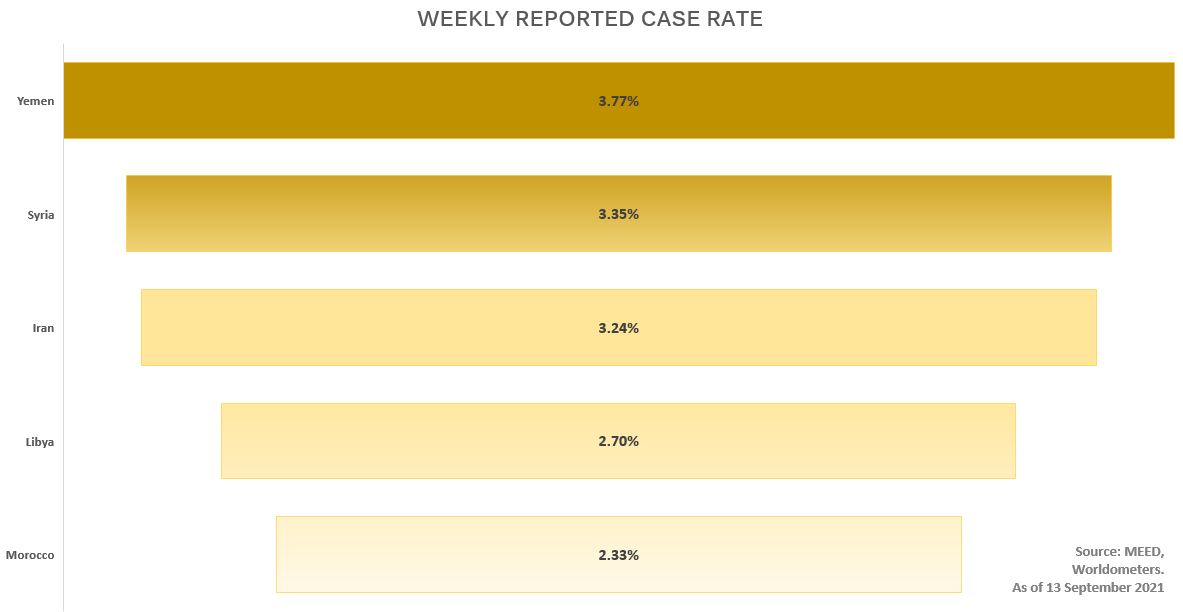 Egypt
Cairo expects to receive its first shipment of the Pfizer-BioNTech vaccine in the second half of September, local media reported. Egypt’s factories have also started producing the Sinovac jab in collaboration with the vaccine’s Chinese manufacturer. Authorities are said to be in talks with US company Moderna to localise the production of its Covid-19 vaccine in the country.

Iraq
Around 100,800 doses of the Oxford-AstraZeneca vaccine were delivered to Baghdad from Italy as part of the Covax vaccine sharing facility. The shipment marks the first delivery from a pledge of 15 million doses to Covax from Italy. It is Iraq’s third receipt through the World Health Organisation-backed programme.

Algeria
Director general of the Institut Pasteur in Algiers, Fawzi Derrar, said Algeria is expected to receive 15 million doses of Covid-19 vaccines in October through an unnamed laboratory. The shipment, combined with Algeria’s existing stockpiles, is expected to help it achieve a vaccination rate of 70 per cent of its total population.

To date, 8 million people have been vaccinated in the country, of which 3 million have had both doses. Algiers received 3 million Covid-19 doses from China on 10 September, and its liquid oxygen production company Linde Gas Algeria has also raised overall production by 33 per cent to meet demand in the healthcare sector. 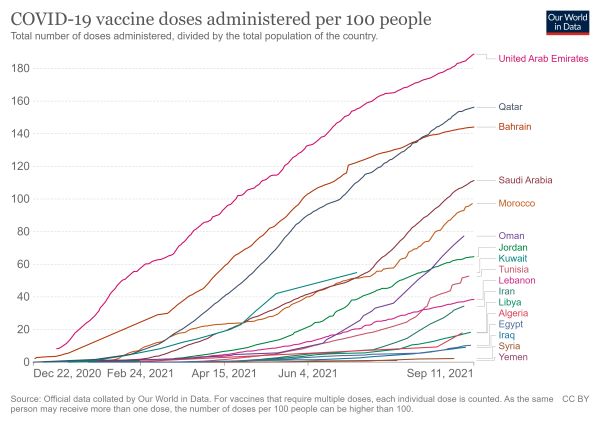