The number of Covid-19 cases in the Middle East and North Africa (Mena) region crossed 13,341,710 on 6 September, according to Worldometers data collated by MEED. 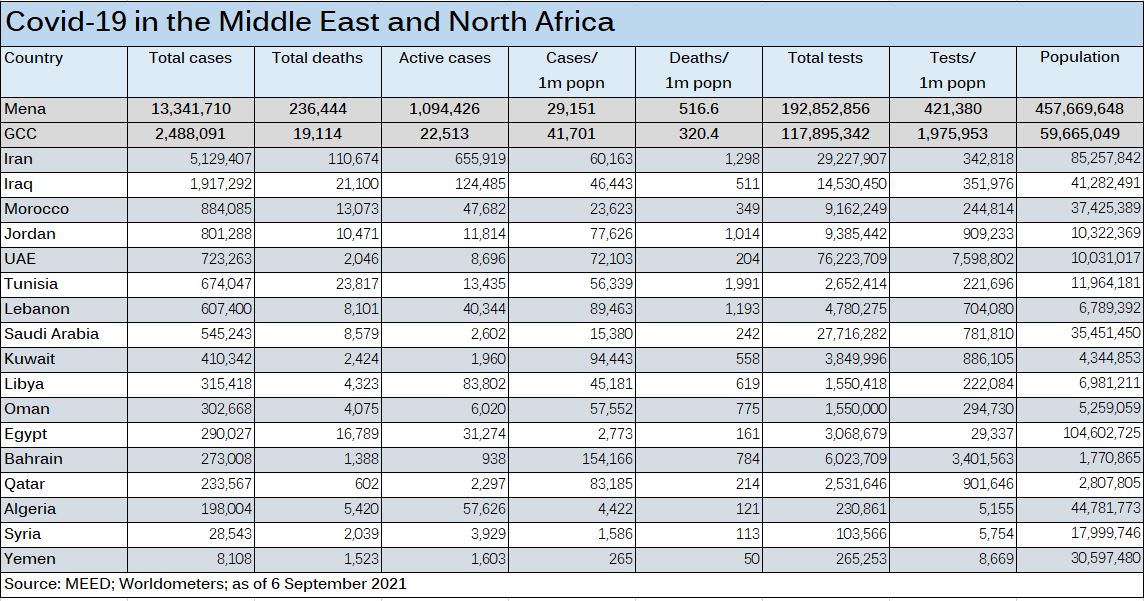 Last week, the Ministry of Interior in Riyadh cautioned that non-Saudis who breach local quarantine laws would be deported and permanently banned from returning to the country. Expatriates must carry proof of vaccination at all times. Saudi Arabia recorded 23,837 violations of Covid-19 precautions in the week to 29 August.

Travel has resumed in Saudi Arabia, with domestic flights open for fully vaccinated individuals. The travel ban on residents from 20 countries was lifted in August on the condition of proof of full Covid-19 vaccination, paving the way for thousands of stranded expats to return to the kingdom.

UAE
Abu Dhabi has lifted the requirement to quarantine for fully vaccinated travellers. The city’s Emergency, Crisis and Disasters Management Committee said the decision was effective from 5 September.

In Dubai, a third dose of the Pfizer-BioNTech vaccine will be administered for residents with compromised immune systems, including those with advanced or untreated HIV, active tumour and haematologic malignancy or undergoing treatment with immunosuppressive or immunomodulatory agents.

Bahrain
Bahrain’s national task force for Covid-19 has formally approved the use of Sputnik V as a booster shot for those aged 18 and above who received their second dose of the Russian vaccine at least six months ago. Manama has also directed that all government employees return to the office.

Oman
In Oman, entry to public areas such as hypermarkets, commercial establishments, coffee shops and restaurants has been restricted to vaccinated individuals. Malls will implement similar rules from 15 September.

Muscat has also asked that all government and private sector employees are vaccinated by 30 September, after which vaccination will be mandatory to enter office premises. Customers and visitors to these establishments, and public transport users, have until 14 October to get vaccinated. Full vaccination is mandatory to enter Oman through its land, sea and air ports.

About 86,400 doses of the Oxford-AstraZeneca vaccine arrived in Oman through the Covax alliance last week.

Kuwait
The health ministry’s plans to administer booster shots from the end of September are on track, local media has reported. Individuals eligible for the booster shot include the elderly and patients with organ transplants, cancer and chronic diseases.

Qatar
Ninety-five per cent of the Qatari population eligible for vaccination has received at least one dose of a Covid-19 vaccine, while 88.1 per cent has received both doses. More than 4.5 million vaccine doses have been administered in the country so far. 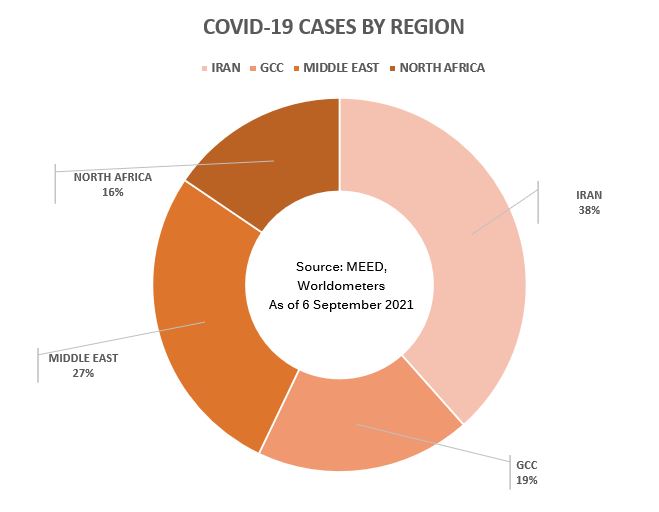 Iran
The locally made Razi Cov Pars vaccine has entered third phase human trials, with 40,000 people participating in the tests. Local reports say the vaccine, developed by the Razi Vaccine and Serum Research Institute, is the second locally made jab to enter clinical trials. It is developed as a three-dose vaccine, of which the first two doses are injectable at a gap of 21 days, with the third intranasal dose administered 51 days later.

Phase 1 of Razi Cov Pars’ studies covered 133 people, while the second phase started in May with 500 people. At the end of phase 2, the vaccine showed immunogenicity of 80 per cent. The Razi Institute, affiliated with Iran’s agriculture ministry, plans to produce 20 million vaccine doses by the end of 2021.

Tehran has also received internationally made vaccines. In a third shipment from Covax, 1,449,600 doses of the Oxford-AstraZeneca vaccine arrived earlier this week. Iran expects to receive a large volume of Sinopharm jabs from China this month as well.

Egypt has also received shipments of vaccines made by Sinopharm, Oxford-AstraZeneca, Sputnik, Sinovac and Johnson & Johnson in recent weeks. Some 7.5 million people have had at least one dose of a vaccine. However, fears persist of a fourth wave of Covid-19 potentially reaching Egypt at the end of this month.

Jordan
Amman has activated the third and final phase of its plan to reopen all economic sectors. State and Media Affairs Minister Sakher Dudin said earlier this week that all sectors would operate at 100 per cent capacity. However, wedding halls can only accommodate 50 per cent capacity with a maximum of 200 people. Similar curbs for festival, conference, exhibition and cinema venues are also in place.

Private sector employees who have not received the first dose of a Covid-19 vaccine, or missed their second dose appointment, must present a negative PCR test on Sundays and Thursdays in the morning. Workers violating these instructions face holiday reductions and salary cuts. 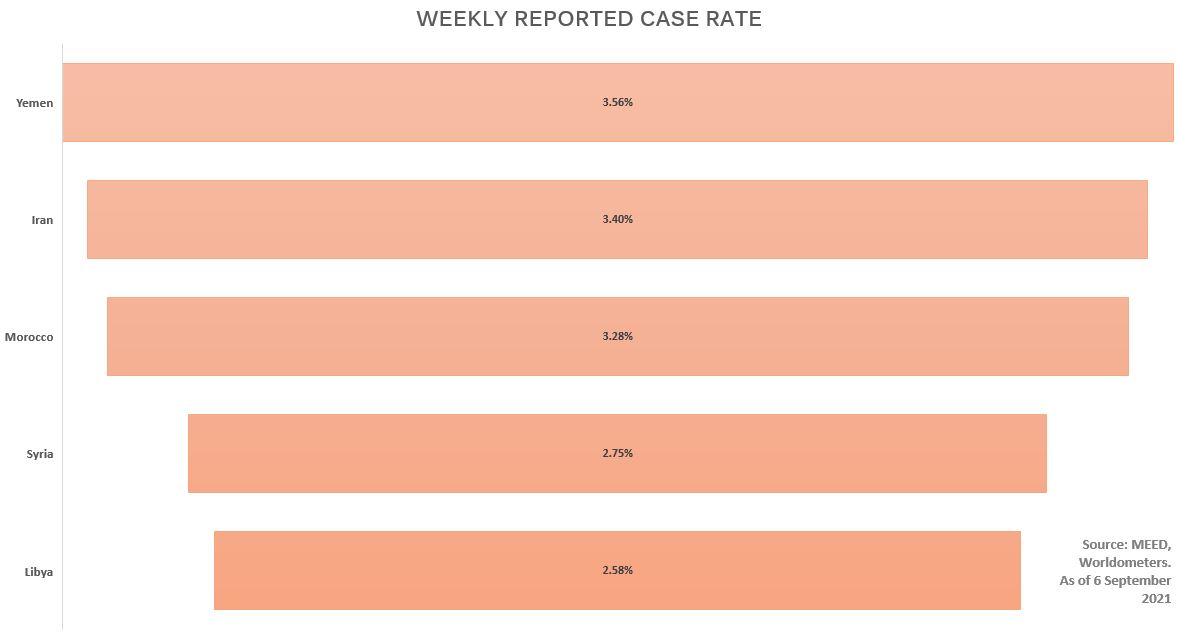 Lebanon
Lebanese ambassador to Cairo, Ali al-Halabi, was assured of Egypt’s support for Beirut during his meeting with Health Minister Hala Zayed earlier this month. Zayed said Egypt would provide Covid-19 vaccines for the Lebanese after it achieves self-sufficiency.

Morocco
Rabat has expanded its inoculation campaign to children over 12 years old after administering more than 33 million doses to adults. More than 420 vaccination centres will work to inoculate children between 31 August and 3 October, according to local media.

Algeria
Algiers has launched a vaccination campaign aimed at achieving herd immunity, with plans to inoculate at least 70 per cent of the adult population by end-2021. The Chinese Sinovac vaccine has been in use in Algeria, and the country plans to localise the production of vaccines to speed up its programme.

Yemen
Yemen received its first shipment of Johnson & Johnson vaccines on 29 August, according to media reports. 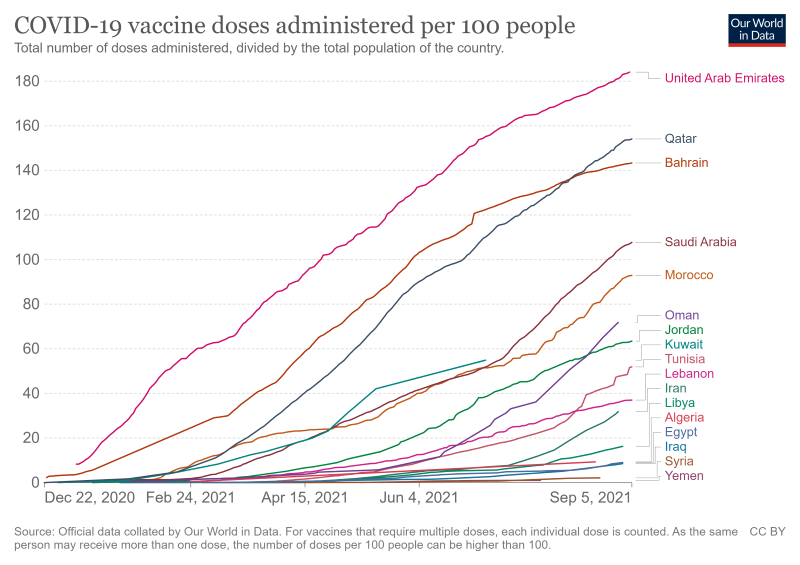