The number of Covid-19 cases in the Middle East and North Africa (Mena) region crossed 13,063,656 on 30 August, according to Worldometers data collated by MEED. 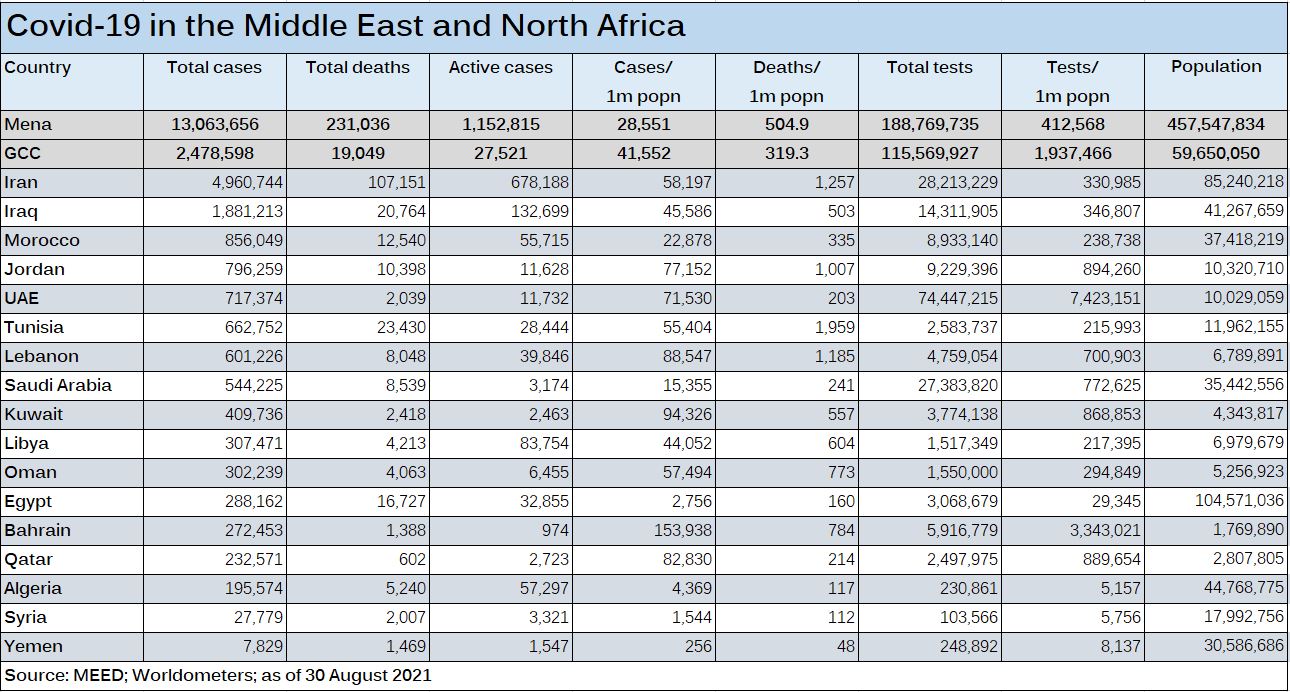 The weekly growth is 24 per cent lower than the 605,155 cases recorded in the week between 16 and 23 August, compared to the 29.3 per cent weekly case growth recorded in the previous week, indicating a slowing in the pace at which new infections are contracted or detected in the region.

Saudi Arabia
Students have returned to in-person classes in the kingdom, with about 6 million pupils aged over 12 understood to have resumed lessons this week with Covid-19 precautions in place. Academic or co-curricular activities such as assemblies, which compromise social-distancing regulations, have been cancelled.

Elementary grade students will continue to study remotely until 30 October or until Saudi Arabia has achieved herd immunity.

Saudi Arabia is also allowing fully vaccinated residents to return from 20 countries, with the move expected to allow thousands of stranded expatriates to travel to the country after their entry was restricted in February. Residents must have been vaccinated in Saudi Arabia before they departed for their home country.

Last week, Riyadh also added the Chinese Sinovac and Sinopharm vaccines to its list of approved Covid-19 jabs, making them the fifth and sixth vaccines to be approved for use in Saudi Arabia after Pfizer-BioNTech’s, Johnson & Johnson’s, Oxford-AstraZeneca’s and Moderna’s jabs.

UAE
The UAE has resumed the applications process to procure tourist visas by individuals from all countries starting 30 August, provided they are fully covered with a World Health Organisation-approved vaccine. The country’s Federal Authority for Identity & Citizenship (ICA) and National Emergency Crisis & Disasters Management Authority announced the decision, which applies to citizens of all countries, including those markets that were previously barred from travelling to the UAE.

The WHO has so far approved vaccines including Oxford-AstraZeneca, Covishield, Johnson & Johnson, Moderna, Pfizer-BioNTech, Sinopharm and Sinovac.

Passenger travel was halted from India, Pakistan, Nepal, Sri Lanka, Uganda and Nigeria as case numbers soared in April and May. The UAE eased curbs in August, allowing residents stranded abroad to return to the country, provided they held a residency visa and had been vaccinated in the UAE.

Schools have also reopened in Abu Dhabi, where private schools that do not submit daily compliance reports to regulators will be fined up to AED250,000. In Dubai, schools are expected to reopen for in-person classes from 3 October.

More than 18 million doses of Covid-19 vaccines have been administered in the UAE, with more than 75.59 per cent of the population having received two doses of a vaccine as of 28 August. 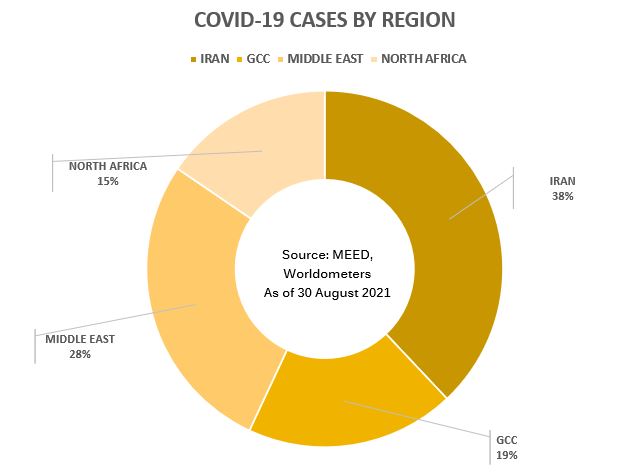 Bahrain
The Civil Aviation Affairs (CAA) updated the travel entry procedures at Bahrain International airport, and from 29 August, vaccination certificates issued by countries whose citizens are eligible for visa-on-arrival will be accepted upon entry.

An additional PCR test will be required on the fifth day of stay, and passengers arriving from Red List countries are prohibited from entry unless they are citizens or residents of Bahrain.

Oman
Oman will allow anyone holding a Covid-19 vaccine certificate to travel to the country from 1 September, the Civil Aviation Authority said earlier this week.

Policy banning arrivals from 18 countries, including India, Pakistan and Bangladesh, since June has been suspended, and all Omani citizens, residents and visa holders, as well as those who do not require visas to travel or can gain them upon arrival, are now allowed to enter the country.

The move is expected to allow thousands of stranded expatriates to return to Oman. All passengers must have received the second dose at least 14 days prior to their arrival, and must quarantine for seven days from their date of arrival.

Kuwait
Sheikh Basel al-Sabah, Kuwait’s health minister, reportedly said the country’s vaccination rate has reached 70 per cent. The health ministry plans to administer booster shots for the elderly, cancer patients and those with chronic diseases or a history of organ transplants from end-September.

Iran
Tehran has been urged to accept western vaccines as a deadly fifth wave continues in the country.

WHO representative to Iran, Jaffar Hussain, reportedly said on 25 August that 3 million Covax doses will be delivered imminently. 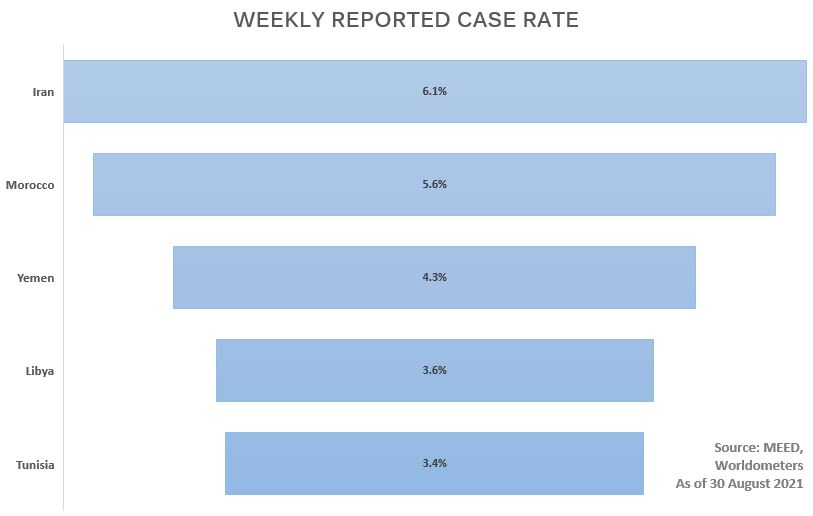 Egypt
Cairo detected its first case of the delta variant of Covid-19 in July, Health Minister Hala Zayed revealed last week. She warned of an impending fourth wave of the virus in the country, adding it was expected by the end of September.

Egypt plans to produce between 15 million and 18.5 million Sinovac doses a month when production picks up. Its national vaccination rate remains low at 3.2 per cent.

Jordan
More than 90 per cent of educational staff in Jordan have been vaccinated against Covid-19, the health ministry has announced. Schools are expected to reopen in the country on 1 September. More than 2.9 million individuals have received both doses of a Covid-19 vaccine in the country.

Algeria
China’s Sinovac Biotech is said to have shipped more than half a million doses of its vaccine to Algeria as part of its commitment to the Covax programme. About 567,600 doses arrived in Algiers on 30 August, with the batch understood to have been purchased by the United Nations Children’s Fund.

Yemen
Yemen received its first shipment of Johnson & Johnson vaccines on 29 August, according to media reports. The 151,000 doses make up the first batch of the 504,000 doses that Libya expects to receive from the US. 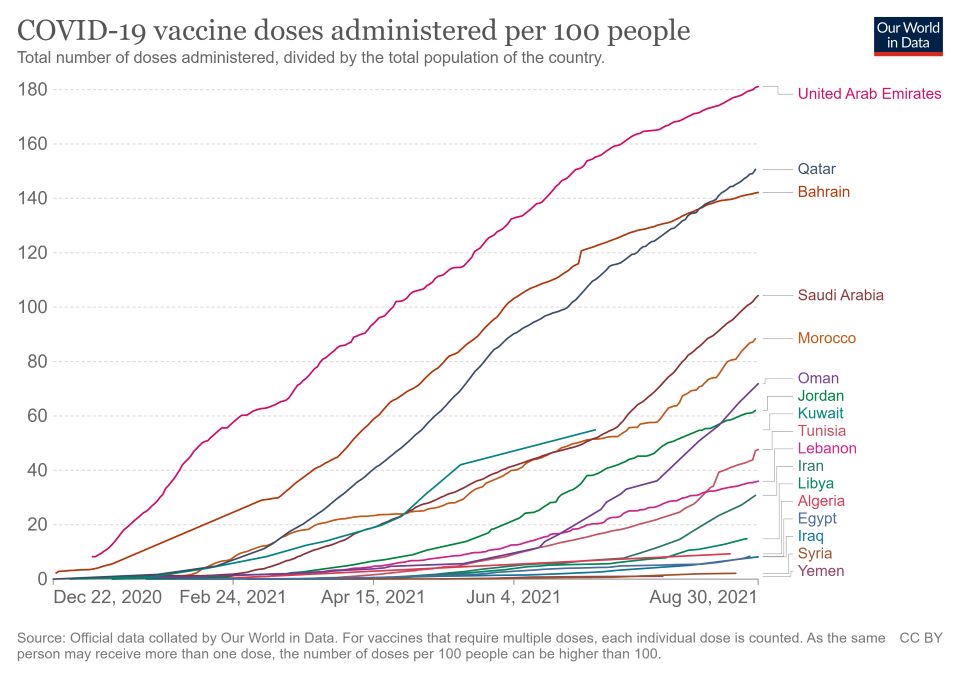