The number of Covid-19 cases in the Middle East and North Africa (Mena) region crossed 12,608,438 on 23 August, according to Worldometers data collated by MEED. 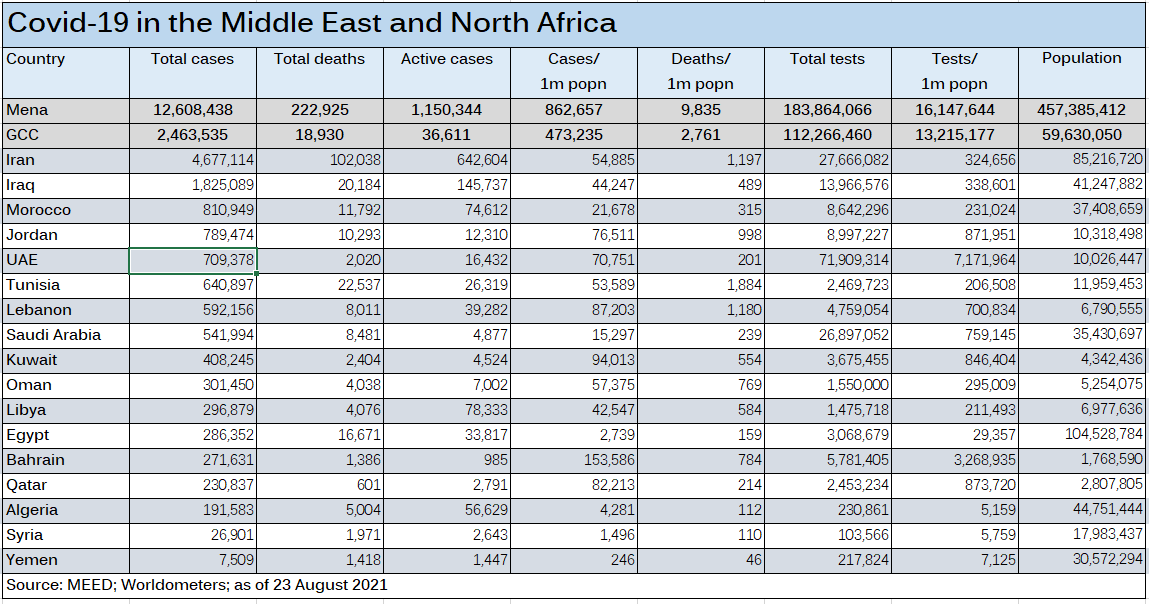 The weekly growth is 29.3 per cent higher than the 427,508 cases recorded in the week between 9 and 16 August, and comes as Covid-19 cases continue to surge in Iran and parts of North Africa.

Saudi Arabia
In-person schooling for intermediate and secondary grade students will commence in Saudi Arabia on 29 August. University and technical training school students will also return to in-person classes, which will be permitted only for students that have received both doses of a Covid-19 vaccine.

Eighty-five per cent of university students have received one dose of a vaccine, while and 59 per cent have received both. Students who have not been fully inoculated will continue learning online through lessons uploaded daily by teachers to the Madrasati platform, Saudi education minister Hamad al-Sheikh said. Primary and kindergarten students will start their academic year with remote learning until 30 October.

Students over the age of 12 that are not fully vaccinated will be not be permitted on campus and they will be considered absent, local media reported.

UAE
Students in the UAE will have a 30-day grace period to be inoculated against Covid-19 when schools reopen, before weekly PCR tests are mandated for unvaccinated children aged over 12 years. Schoolchildren aged 3-12 years who are unvaccinated will also be tested every month, it was announced during a briefing held by Farida al-Hosani, the federal government’s health spokesperson.

In Abu Dhabi, the emergency, crisis and disasters committee has raised the capacity for certain activities and venues that will be restricted to fully vaccinated individuals. Effective 20 August, capacity at shopping malls, entertainment centres, cultural centres, museums, cinemas, restaurants and cafes will be increased to 80 per cent. Restaurants can seat up to 10 people on a single table. The capital has also opened two Covid-19 vaccination centres – one at Mina Zayed and the other at Al-Ain Convention Centre – exclusively for students and staff of educational institutions ahead of the start of the new academic year.

Bahrain
Manama’s Covid-19 taskforce has approved booster doses of Pfizer-BioNTech and Oxford-AstraZeneca for individuals with compromised immunity or those aged over 60 years. These people must have been fully vaccinated for at least six months, following which they can receive the Pfizer-BioNTech jab or the same vaccine they received for their first two doses. 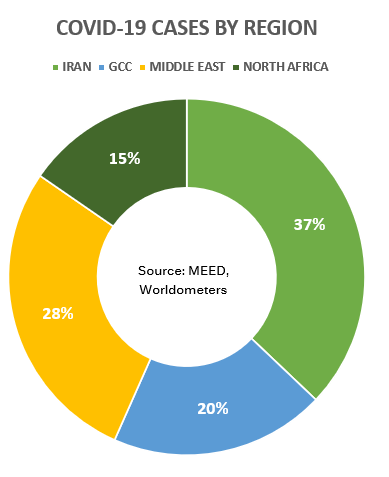 Oman
All travellers to Oman must have received a vaccine approved by Oman and must submit PCR test results prior to arriving in the country. Seven days of institutional quarantine is also mandated, except for individuals in special categories. Muscat has also lifted the night curfew that was implemented in the country in recent weeks to curb the spread of the virus, while mandating fully vaccinated status for entry to government institutions, shopping malls, restaurants and travel from 1 September.

Kuwait
Passengers that have received two doses of the Sinopharm, Sinovac or Sputnik vaccines can only enter the country if they have received a booster shot of a vaccine approved by Kuwait, including Pfizer-BioNTech, Moderna, Oxford-AstraZeneca and Johnson & Johnson. Kuwait also plans to resume direct flights to India, Bangladesh, Pakistan, Sri Lanka, Egypt and Nepal, but a timeline has yet to be confirmed. Local media reported the Kuwait International airport will start receiving 15,000 passengers a day, raising capacity from the existing 10,000 travellers allowed daily.

Qatar
Doha received 48,000 doses of the Oxford-AstraZeneca vaccine as part of a self-financing agreement with Covax earlier this month.

Iran
Tehran’s prohibition on imports of US- and UK-produced vaccines, as well as a lack of transparency and the prevailing mismanagement, have exacerbated the pandemic’s impact in Iran, a human rights group said earlier this week. Iran is in its fifth wave of the pandemic, and newly sworn-in President Ebrahim Raisi has promised to accelerate the local vaccination drive ahead of pursuing economic revival.

“The government's first priority is controlling the coronavirus, improving the health situation and widespread vaccination,” he said. “The economy and the livelihood situation is the second [priority].”

Iran has said US sanctions have made it harder to import vaccines, but the country has received more than 5 million doses through the Covax scheme, and is also producing its own vaccines. 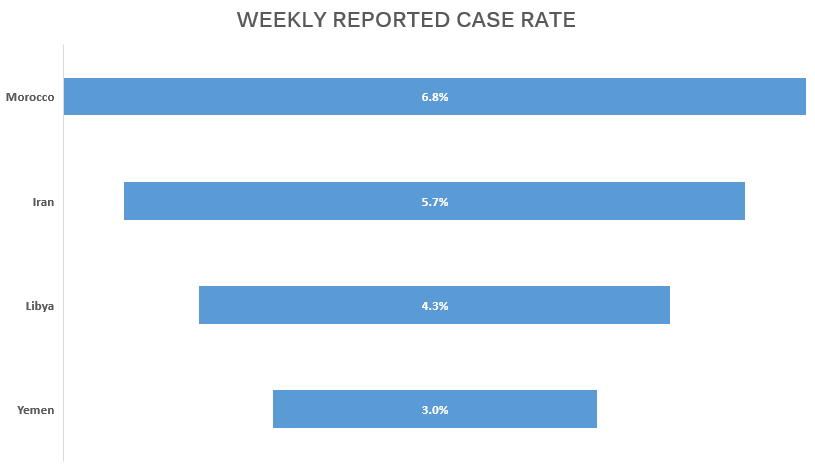 Egypt
Cairo received 1.76 million doses of Oxford-AstraZeneca vaccines earlier this week in its third batch of jabs from the manufacturer as part of the Covax scheme.

Morocco
More than 12.3 million people have been fully vaccinated in Morocco, the country’s health ministry said on 18 August. About 16.9 million first doses of a Covid-19 vaccine had been administered in the country as of 18 August.

Libya
Malta has donated about 40,000 doses of the Oxford-AstraZeneca vaccine to Libya after having vaccinated more than 90 per cent of its local eligible population. The Mediterranean island country has also donated 40,000 rapid test kits, according to media reports.

Algeria
President Abdelmadjid Tebboune has instructed national oil company Sonatrach to acquire trucks to transport oxygen as shortages plague the North African nation. The target is to reach 800,000 litres of oxygen a day by the first half of 2022, with Tebboune emphasising the need to accelerate Algeria’s vaccination programme. He also called for the promotion of pharmaceutical group Saidal as part of wider efforts to localise drug production, including of Covid-19 vaccines, in the country.

Yemen
Health minister Qasem Buhaibeh is understood to have told the state television station that Yemen is in its third wave of Covid-19, with some quarantine centres “overwhelmed with cases”. He attributed the situation to poor testing and surveillance, adding that the number of confirmed cases likely constitutes 10 per cent of the actual transmitted infections. 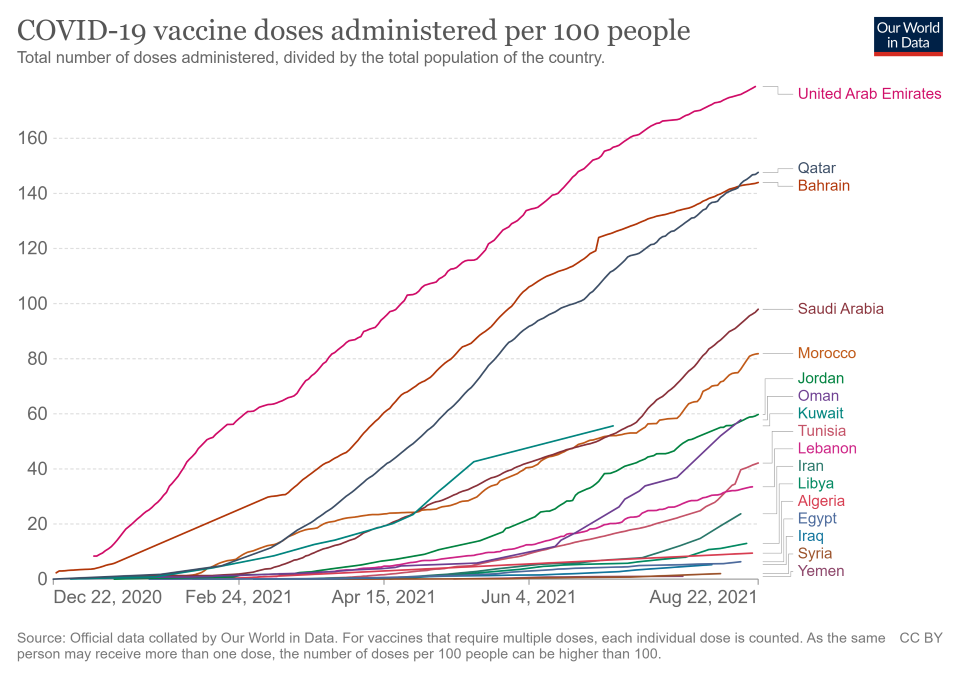