The number of Covid-19 cases in the Middle East and North Africa (Mena) region crossed 12,190,541 on 16 August, according to Worldometers data collated by MEED. 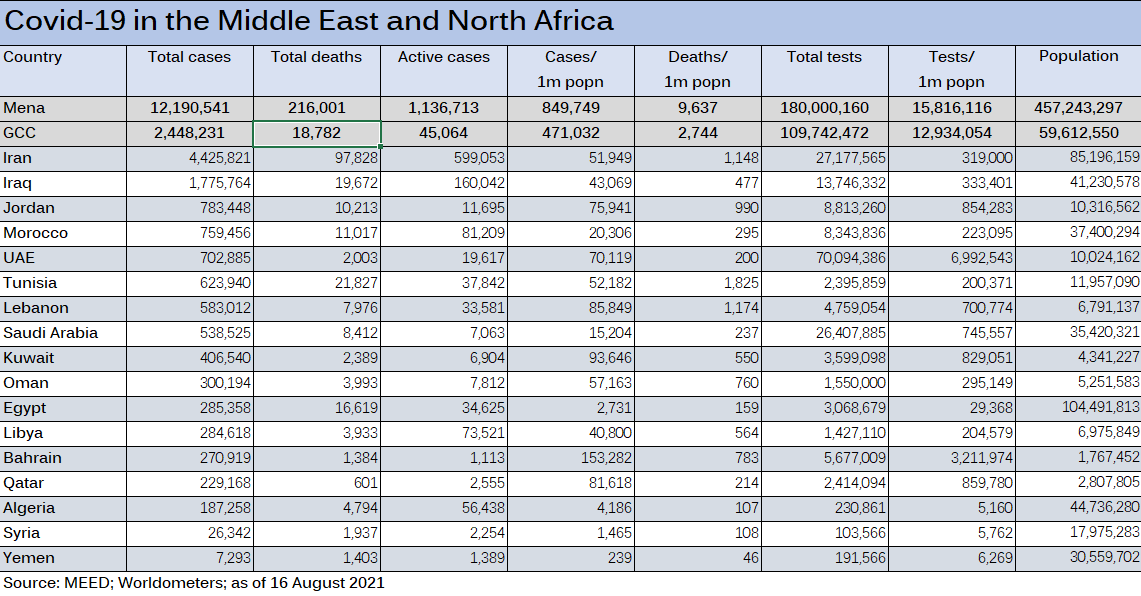 Since 9 August, 427,508 new cases have been detected in the 17 Mena countries tracked by MEED.

However, case numbers are continuing to grow in Morocco, with Algeria and Libya also recording higher infections in the past week.

The situation also remains dire in Iran, which is said to have entered its so-called fifth wave of Covid-19. Last week, Mohammadreza Zafarghandi, chairman of the Medical Council of the Islamic Republic of Iran, expressed anger over the inability to import vaccines, which he said have proven to work in other parts of the world.

“Mortality has significantly dropped in countries where they vaccinated the population without any limits and setting [restrictions]. Will those who said vaccine imports should be restricted be accountable today?” Zafarghandi tweeted.

Supreme Leader Ayatollah Ali Khamenei banned vaccine imports from the US and Britain on 8 January. The administration of former president Hassan Rouhani, however, imported vaccines from various sources, while also focusing on the development of homegrown jabs. 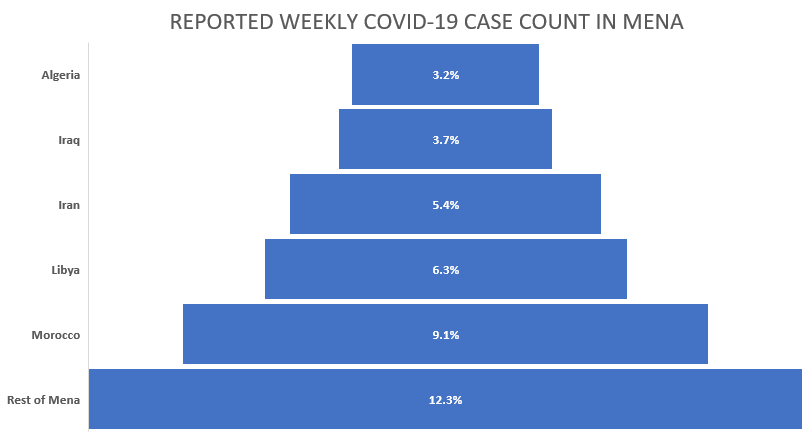 Saudi Arabia
Health Ministry spokesman Muhammad al-Abdelali said the delta variant has been detected in Saudi Arabia, and receiving both doses of a vaccine remains the most effective way to counter its spread.

Last week, officials at schools and educational institutions were also granted access to track data including health, vaccination and infection status for students and staff members through the Tawakkalna app.

Students are expected to return to school for the first semester of the new academic year at the end of this month. Only fully jabbed students at intermediate and secondary levels can return to physical classes, and primary students will continue their education online, as will those who are at an intermediate level but younger than 12 years old.

UAE
Residents arriving in Dubai from India, Nepal, Nigeria, Pakistan, Sri Lanka and Uganda are no longer required to carry a Covid-19 vaccination certificate. However, they must have pre-approval to enter the country from the city’s General Directorate of Residency and Foreigners Affairs, a negative Covid-19 test certificate issued in the past 48 hours, a PCR rapid test result four hours before departure and take a PCR test upon arrival in Dubai, according to data on Emirates airline’s website.

In Abu Dhabi, the Emergency, Crisis and Disasters Committee has approved an entry process for public spaces that will be limited to citizens, residents and tourists from 20 August. Entry will be granted to individuals with the ‘green’ status on the Alhosn app, which appears after a negative PCR test result and remains for 30 days.

Oman
The Health Ministry says it is recording positive turnout from the target groups of its national immunisation programme, with the Al-Dhahirah governorate also beginning vaccination drives for expatriates. Phase one of the Al-Dhahirah programme will target barbers, beauty salon staff, house helpers and farm workers.

Kuwait
Kuwait plans to administer booster shots of the Pfizer-BioNTech vaccine to at-risk groups from next month, local media reported, with organ transplant, oncology and low-immunity patients to be prioritised. The Pfizer-BioNTech jab is primarily in use in Kuwait, but the government has also ordered 2 million doses of the Moderna jab, as well as authorised emergency use of the Oxford-AstraZeneca and Johnson & Johnson vaccines.

The Health Ministry’s request, worth KD24m ($80m), to double the Moderna order to 2 million was approved by the Central Agency for Public Tenders, an official said last week.

Qatar
More than 4 million vaccine doses had been administered in Qatar as of 11 August, with 88 per cent of the eligible population – individuals aged 12 and over – having received at least one dose of the vaccine. The Public Health Ministry is urging the population, including at-risk groups such as pregnant women, to receive the vaccine as the delta variant spreads in Qatar. 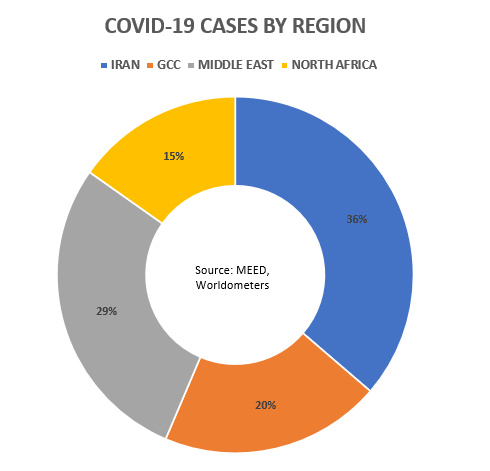 Iran
A six-day ‘general lockdown’ has been imposed in Iran starting 16 August as case numbers continue to grow in the country, which describes the spike as its fifth wave of the virus. The lockdown covers bazaars, markets and public offices, in addition to cinemas, restaurants and gyms. A travel ban has also been imposed between all Iranian cities on 15-20 August.

Egypt
An additional 1.76 million doses of the Oxford-AstraZeneca vaccine arrived in Cairo on 13 August, making it the third shipment from Covax. It raises the total number of Oxford-AstraZeneca shots delivered to Egypt from Covax to 4.3 million doses. The country has also received shipments of Sputnik, Sinopharm, Sinovac and Johnson & Johnson shots.

About 261,000 doses of the single-shot Johnson & Johnson vaccine reached Egypt on 9 August, and will be distributed for individuals who want to travel abroad. 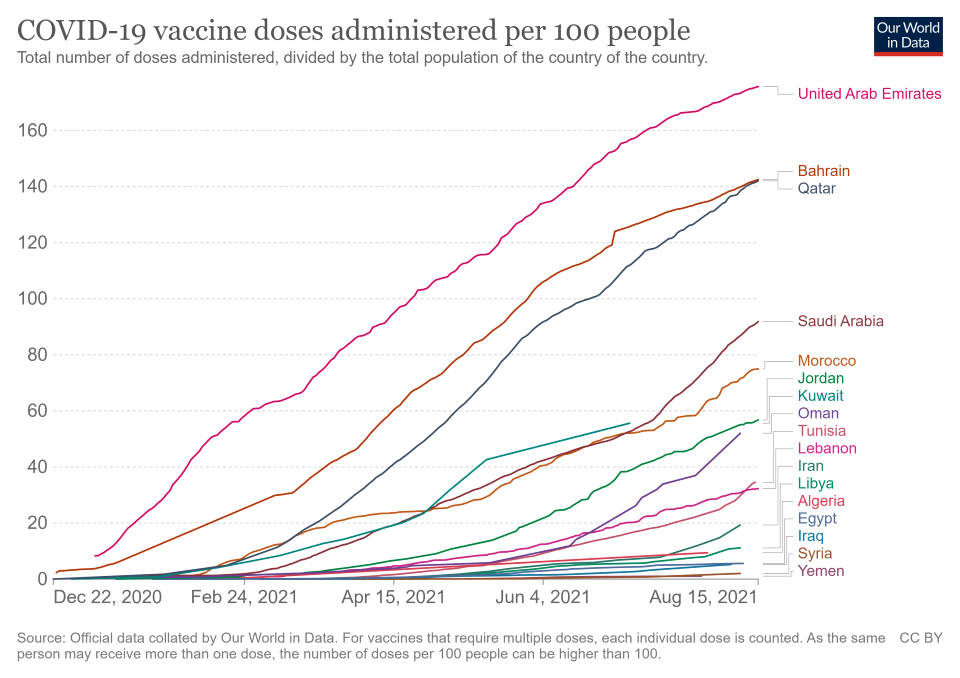 Morocco
A shipment comprising 600,000 Pfizer-BioNTech doses reached Rabat on 13 August as Morocco looks to curb a rapid spike in Covid-19 cases noted over the past month. Morocco has Africa’s most vaccinated population, having administered 27.3 million doses of Sinopharm and Oxford-AstraZeneca, as well as about 300,000 Johnson & Johnson doses.

Libya
Malta will send 40,000 doses of Covid-19 vaccines and an unspecified number of test kits to Libya, according to a local daily. The consignment follows a donation of test kits from Malta to Tunisia earlier in the month. The UN Children’s Fund also said on 11 August it would support Libya’s recently launched ‘exceptional’ vaccination drive through the provision of cold boxes, vaccine carriers, quality monitoring devices, first aid kits and personal protective equipment.

Tunisia
The second day of Tunisia’s ‘intensive’ Covid-19 vaccination programme concluded on 15 August with 594,141 doses administered through 405 vaccination centres across the country. Moderna was primarily used for the shots, but the Johnson & Johnson jab was given to Tunisians studying abroad. Tunisia also received a Kuwaiti donation of 20 tonnes of liquid oxygen earlier on 15 August. Tunis has said it hopes to vaccinate 50 per cent of its 11.6 million population by mid-October.

Algeria
In the throes of a new wave of infections, Algeria has started importing concentrators to overcome the oxygen shortage, with the Health Ministry receiving 1,500 units on 15 August. The shipment raised its total concentrator imports since 25 July to 4,050, and a further seven high-capacity oxygen generators are expected this month.

The ministry said it would receive 3 million doses of an unspecified Covid-19 vaccine in the coming days, and expects another 6.2 million pending doses before the end of this month.

Oil company Sonatrach has also started importing oxygen concentrators, with four of its 10 imported units so far to be provided to the Central Hospital Pharmacy to ensure their fair distribution.