The number of Covid-19 cases in the Middle East and North Africa (Mena) region crossed 14,137,774 on 4 October, according to Worldometers data collated by MEED. 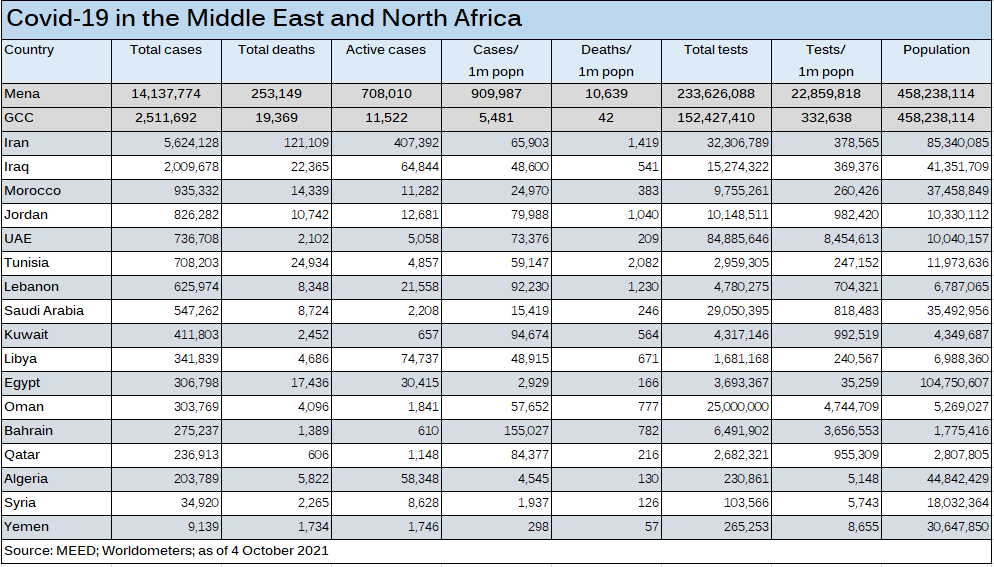 Since 27 September, 142,546 new cases have been reported in the 17 Mena countries tracked by MEED.

The rate of weekly case growth slowed to 1.02 per cent from last week’s rate of 1.24 per cent.

These figures indicate a slowing of Covid-19 infections in the region. In Syria, the weekly case rate has slowed from 7.3 per cent on 27 September to 5.9 per cent on 4 October.

Only Egypt recorded growth in case rates from 1.58 per cent on 27 September to 1.72 per cent on 4 October amid growing concerns of a fourth wave expected this month. 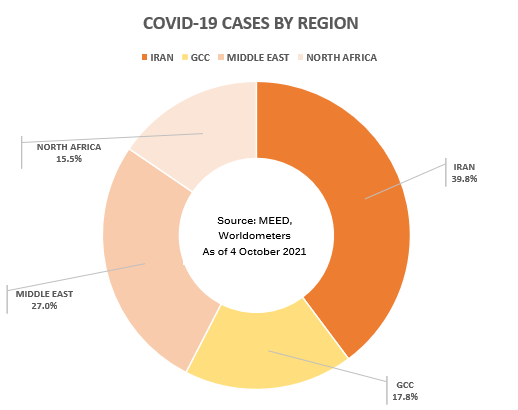 Saudi Arabia
Riyadh has mandated two doses of a Covid-19 vaccine for individuals wishing to board a plane or other modes of public transport in the kingdom. The rule takes effect on 10 October and also covers participation in cultural, scientific, social and recreational events. Those who have not received both doses of a vaccine will also not be allowed to participate in economic, commercial, cultural, recreational, sports and tourism activities, and will be prohibited from entering government or private sector establishments.

More than 41 million Covid-19 vaccine doses have been administered in Saudi Arabia to date. The kingdom said last week it would start giving booster shots to individuals aged 60 and older.

UAE
Mask-wearing rules have been relaxed in some public places in the UAE, with the health ministry confirming last month they would no longer be required for people exercising outdoors, in a car with household members, alone indoors or in barbershops and salons.

Oman
A certificate of completing a full schedule of an approved Covid-19 vaccine is required to renew expat residency cards and enter workplaces from 1 October. Proof of receiving full vaccination is also necessary for employees to enter public and private sector offices.

From 15 October, visitors to government and private sector offices and public transport users must also have received two doses of a Covid-19 vaccine approved in Oman. Muscat is reportedly considering a booster dose for immunocompromised individuals.

Kuwait
The new academic year commenced with about 500,000 students returning for in-person classes earlier this week in Kuwaiti public schools for the first time since physical lessons were suspended in March 2020. Private schools reopened in Kuwait on 27 September. Kuwait plans to roll out vaccines for children aged 5 to 11 shortly, the health ministry said last week.

Qatar
Doha will start easing Covid-19 restrictions as infection numbers drop in Qatar, with masks no longer mandatory for outdoor activities except public events, markets and exhibitions. Masks must continue to be worn at mosques, schools, hospitals, universities and indoor public areas. Markets, malls, museums, public libraries and public and private sector offices may operate at full capacity, and food courts can operate at 50 per cent capacity. Prayer areas and fitting rooms at malls have been allowed to reopen. 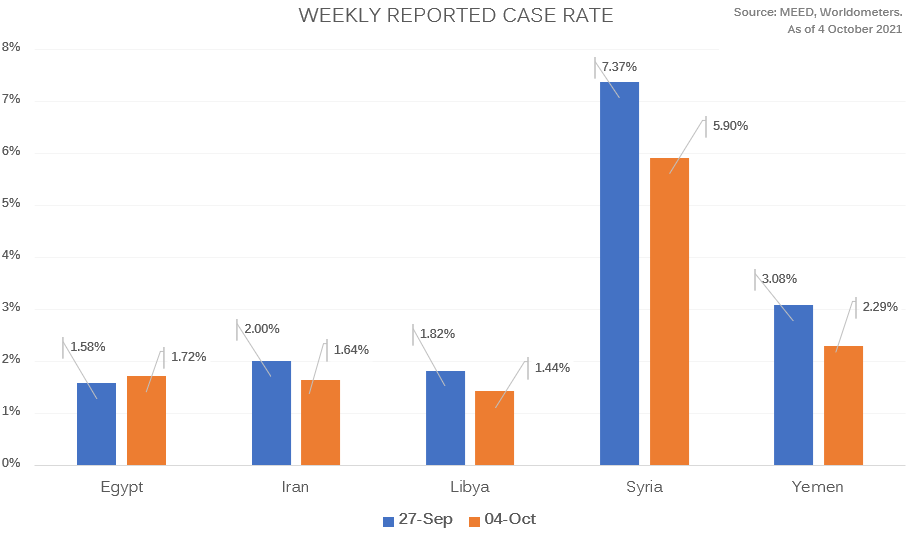 Egypt
Cairo received the first shipment of Pfizer-BioNTech’s jab as a direct donation from the US on 30 September. The 1.6 million doses are expected to help Egypt progress in its goal to vaccinate 40 per cent of its population by the end of 2021. This follows the estimated 4.7 million doses that the US and partner nations have donated to Egypt through the Covax alliance. Poland also sent more than 100,000 doses of the Oxford-AstraZeneca vaccine to Egypt last week.

Egypt is now providing immediate vaccines without prior registrations to speed up its inoculation programme and relieve pressure on healthcare facilities as fears of a fourth wave of infections grip the country, with its peak expected in October.

Iraq
The World Bank has approved a $100m project to scale up Iraq’s healthcare sector in response to Covid-19 and will support the rollout of jabs to priority population groups. The bank said its programme will also strengthen institutional systems in the Iraqi healthcare sector, help procure vaccines, improve healthcare waste management and raise public awareness of the importance of vaccination.

Morocco
Rabat will start administering booster shots this month as part of its national immunisation campaign, the country’s health ministry confirmed on 1 October.

Libya
More than 240,000 doses of the Oxford-AstraZeneca vaccine were sent to Libya on 30 September from Italy, following the 117,600 vaccines sent to the Mena country in mid-September. A third delivery comprising 144,000 doses is expected in Libya this week, raising Italy’s tally of donations to the country to 501,600.

Algeria
Algiers announced it has started producing the Chinese-made Sinovac vaccine locally, with about 6-8 million doses expected to be manufactured each month at the Saidal factory in the eastern city of Constantine. 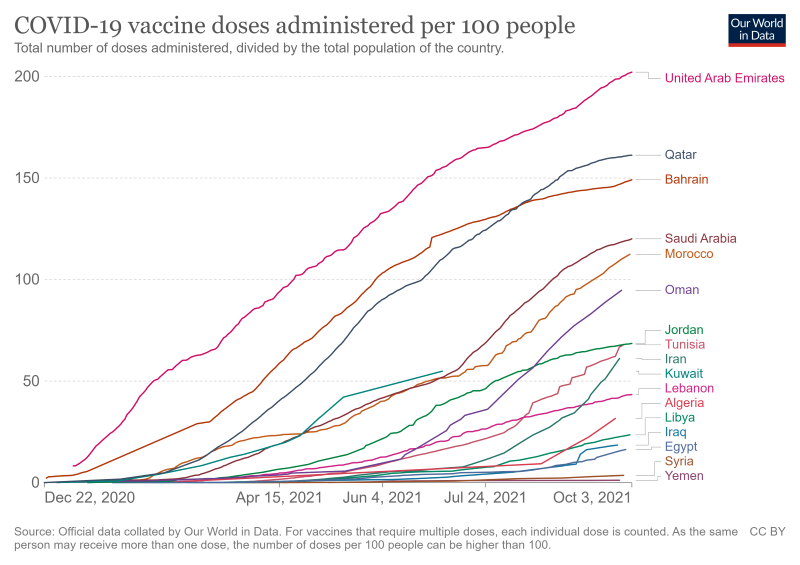