The number of Covid-19 cases in the Middle East and North Africa (Mena) region crossed 18,780,829 on 22 February 2022, according to Worldometers data collated by MEED.

Since 15 February, 385,228 new cases have been reported in the 17 Mena countries tracked by MEED. The figure is 35.25 per cent lower than the 594,933 new cases reported in the previous week and indicates that new cases are emerging at a slower rate in the Mena region.

Saudi Arabia
Saudi Arabia’s Oversight and Anti-Corruption Authority (Nazaha) arrested a Ministry of Health employee and two citizens who acted as mediators on allegations of receiving money in exchange for modifying the health status of a number of citizens to ‘immune’ without them receiving the vaccine.

The Saudi interior ministry has also listed penalties for private sector establishments that violate preventive measures against Covid-19, such as allowing entry to Covid-positive or unvaccinated individuals, or not checking the health status of individuals through the Tawakkalna app.

Penalties will be doubled for repeat offences, with the company facing closure for a period not exceeding six months.

UAE
Authorities in Sharjah have announced the gradual lifting of restrictions on all activities and event capacities in the city, with social distancing at mosques and places of worship reduced to 1 metre. Events such as weddings and funerals will be allowed to be conducted at full capacity. Wearing masks remains mandatory in Sharjah.

Bahrain
Bahrain’s Civil Aviation Authority has said visitors to the country are no longer required to take a PCR test or quarantine on arrival. People in contact with active cases, including those that do not hold a green pass on the kingdom's BeAware app, are also no longer required to undergo a precautionary period of isolation.

Kuwait
Worshippers in Kuwaiti mosques are no longer required to maintain physical distancing as part of newly introduced measures to ease curbs. A ban on in-person events, such as conferences, training courses, weddings and funerals, has also been scrapped under the new measures that took effect on 20 February.

Health Minister Khaled al-Saeed has asked the country's Civil Service Commission to permit the provision of financial allowances to medical staff who helped Kuwait combat Covid-19. The minister requested the move be considered under the commission’s Decision 13/2020, which allowed the provision of financial bonuses for employees working in hazardous, noisy, infected or polluted working environments.

Oman
Oman’s health ministry will no longer print Covid-19 negative PCR result travel forms and has also cancelled the attestation (stamping) fee of RO5. The ministry told the local newspaper Times of Oman that PCR test results with QR codes will be accepted instead and must be registered in the Tarassud app. 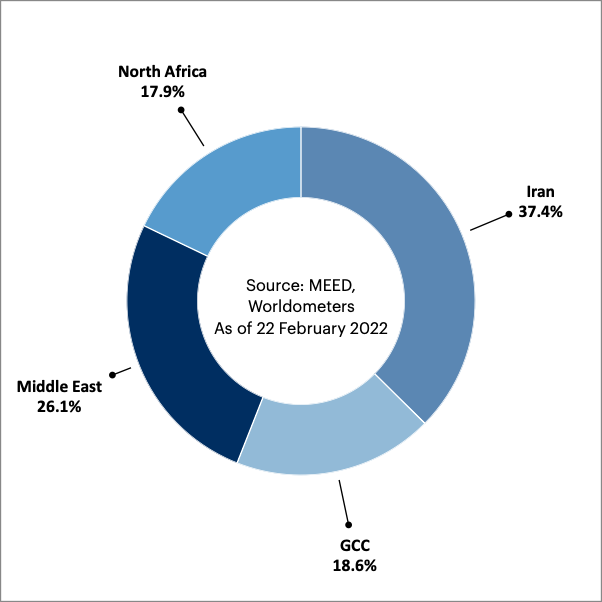 Iran
Tehran has reportedly returned 820,000 doses of Covid-19 vaccines donated by Poland because they were manufactured in the US. Media reports citing state TV said Mohammad Hashemi, an official in the Iranian Health Ministry, said the 820,000 doses were part of a donation of about 1 million doses of the British-Swedish Oxford-AstraZeneca vaccine to Iran.

Hashemi said, “after coordination with the Polish ambassador to Iran, it was decided that the vaccines would be returned”.

Supreme Leader Ayatollah Ali Khamenei in 2020 rejected imports of American or British vaccines. Iran imports vaccines made in other countries and is also locally developing jabs against Covid-19.

The locally-made Razi Cov Pars vaccine received a licence for a clinical trial on adolescents earlier this week. Tehran Times reported the trial will take place by the end of the current Iranian calendar year (20 March) with 210 volunteers.

Egypt
Egypt is among the first six countries that will receive the technology needed to produce mRNA vaccines on the African continent, the World Health Organisation (WHO) said on 18 February. The global mRNA technology transfer hub was established in 2021 to support manufacturers in low- and middle-income countries to produce their own vaccines, ensuring that they have all the necessary operating procedures and know-how to manufacture mRNA vaccines at scale and according to international standards.

Earlier this week, Higher Education Minister and acting Health Minister Khaled Abdel Ghaffar also announced that Egypt has produced more than 30 million doses of the Sinovac Covid-19 vaccine that it is manufacturing through local company Vacsera. The Palestinian Authority was reportedly the first entity to receive 500,000 doses of the vaccine.

Jordan
Authorities in Jordan have scrapped almost all restrictions, except requiring vaccination certificates to enter some buildings. Most restrictions ended in the country last year. Government spokesman Faisal Shboul said a negative PCR test result will no longer be needed to enter Jordan or attend gatherings such as concerts, parties and weddings. From 1 March, the quarantine period for infected people will be reduced from one week to five days.

PCR results will no longer be required for arrivals through any of Jordan’s ports, and in-class schooling has resumed.

Morocco
Morocco is at the ‘green level of transmission’ and the Omicron wave is at the ‘pre-close’ stage in the country, according to Mouad Merabet, coordinator of the National Centre for Public Health Emergency Operations at the country’s health ministry. According to state news agency MAP, Merabet said the Omicron wave has slowed down and allowed Morocco’s “rapid transition” from the orange level (moderate) to the green level of transmission.

However, some provinces remain at the orange level, he said, adding: "The Omicron wave is not yet closed; another week of the green level is needed to remain in compliance with the rules for assessing the level of transmission.

"The virus is currently transmitting weakly [in] the majority of provinces and prefectures, but no province has zero transmission. The risk of contamination is there, and so is the risk of severe [illness due to Covid]. Therefore the risk of death is not zero.”

Morocco is also moving to revive tourism. On 21 February, the government launched a call for expressions of interest to identify establishments wishing to benefit from state support worth MD1bn to resume activity.

The Ministry of Tourism, Handicrafts and Social and Solidarity Economy said subsidies will be granted up to a maximum of 10 per cent of the turnover achieved by the tourism establishment in 2019, capped at MD10m.

Libya
Negotiations are underway to provide Libya with the Sinovac vaccine made in Egypt, according to Heba Wali, president of Egypt’s Vacsera. Other African countries have also requested shipments, and distribution could be conducted through the Covax alliance or direct payments, Bloomberg reported. 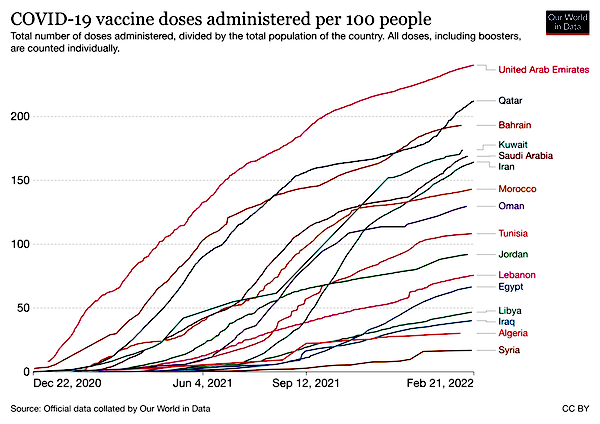