The number of Covid-19 cases in the Middle East and North Africa (Mena) region crossed 11,763,033 on 9 August, according to Worldometers data collated by MEED. 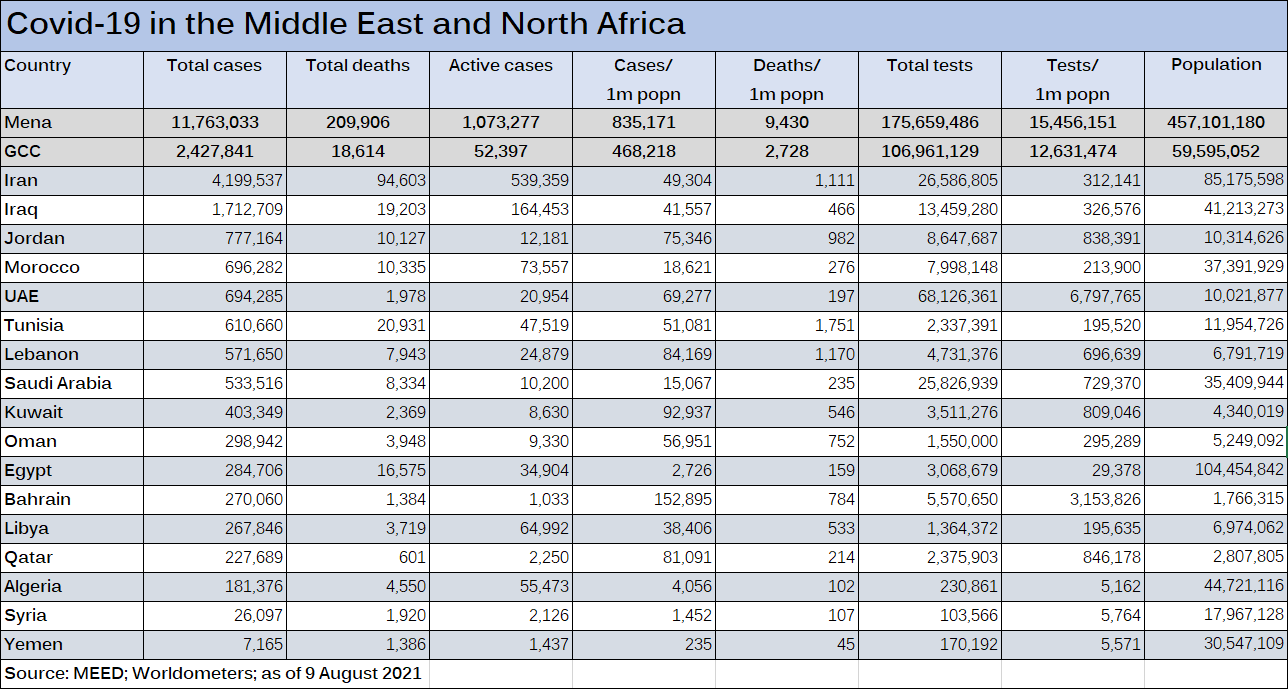 Since 2 August, 520,371 new cases have been reported in the 17 Mena countries tracked by MEED.

The weekly growth is 20.2 per cent higher than the 415,167 cases recorded in the week between 26 July and 2 August, and comes as Covid-19 cases continue to surge in Iran and parts of North Africa.

Iran and Morocco recorded the fastest growth in new cases in the week to 9 August.

Tehran’s cases grew 7.58 per cent from 3.9 million on 2 August to reach almost 4.2 million on 9 August, even as the country advances efforts to develop local vaccines in collaboration with manufacturers from Australia and Russia.

In response, Morocco has tightened restrictions on movement, including to cities such as Agadir, Casablanca and Marrakech, and capped limits on capacity in public spaces such as hotels. 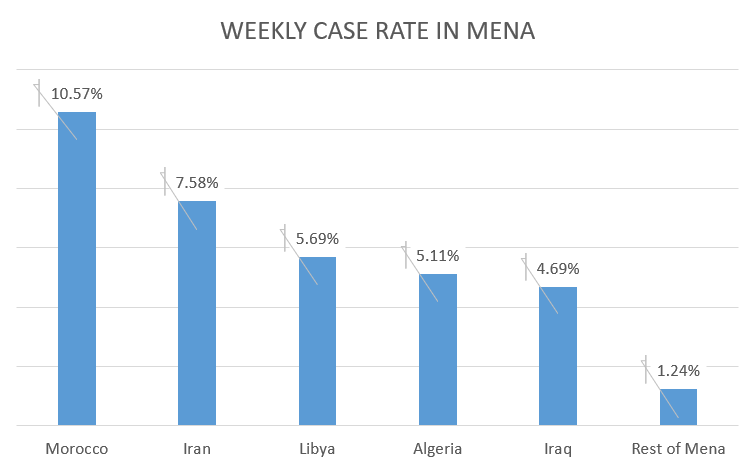 Weddings and funerals remain banned, and gatherings of more than 25 people are prohibited. Cafés, restaurants and public transport must operate at 50 per cent capacity.

About 30 per cent of the North African nation’s 36 million-strong population has been vaccinated to date.

Saudi Arabia
Unvaccinated employees in Saudi Arabia will have leave days deducted until they receive a Covid-19 vaccine. This development came on the heels of the kingdom limiting entry to institutions to vaccinated people since 1 August.

Last week, Saudi Arabia's Human Resources & Social Development Ministry said unvaccinated employees were directed to work remotely until 9 August, after which employees will be granted leave from their official balance. If official paid leave days have been exhausted in the public sector, then absences could be considered as unpaid excused leaves.

Employees who have exhausted their leave days in the private and non-profit sectors will be granted unpaid annual leave, and their work contract considered suspended if the period exceeds 20 days, unless both parties agree otherwise.

Entry to schools will also be limited to fully vaccinated high and middle school students when the academic year begins on 29 August. Elementary and preschool students are exempt from returning until 70 per cent herd immunity has been achieved through double doses.

UAE
Since 5 August, the UAE has allowed some residence visa holders to seek permission to return to the country from India, Nepal, Nigeria, Pakistan, Sri Lanka and Uganda. All vaccinated individuals, as well as unvaccinated professionals in certain job categories, are covered by the decision, the General Civil Aviation Authority and National Emergency, Crisis and Disaster Management Authority said.

Travellers must have a valid UAE visa and show proof of having received both doses of the vaccine in the UAE. Unvaccinated travellers eligible to apply for permission to return include medical workers, teachers at UAE schools and universities, residents with extenuating circumstances, patients undergoing medical treatment in the UAE, and employees of federal and local government agencies.

Residents must have been vaccinated in the UAE, and people immunised in the six countries are not eligible to return for now, regardless of the vaccine administered. This includes people who received Covishield, the name of the Oxford-AstraZeneca vaccine made on licence by the Serum Institute of India.

In the same week, the UAE, Bahrain and Qatar were also moved to the UK’s amber travel list from the red list, meaning people entering most parts of the country from these destinations are not required to pay for a 10-day stay in a government quarantine hotel. They must isolate for 10 days on arrival in the UK, but may be released after a negative test result on day five.

Oman
Students aged 12 and above have started receiving vaccines as Oman prepares for the new school year, with more than 320,000 public and private school students eligible for the jab. Ninety-thousand students have been shortlisted just in Muscat.

Oman’s Heritage & Tourism Ministry has also allowed tourism facilities in Dhofar to operate at 75 per cent capacity, raising the previous limit of 50 per cent. The decision is expected to boost facilities such as hotels in Salalah as the tourist season peaks in the region. 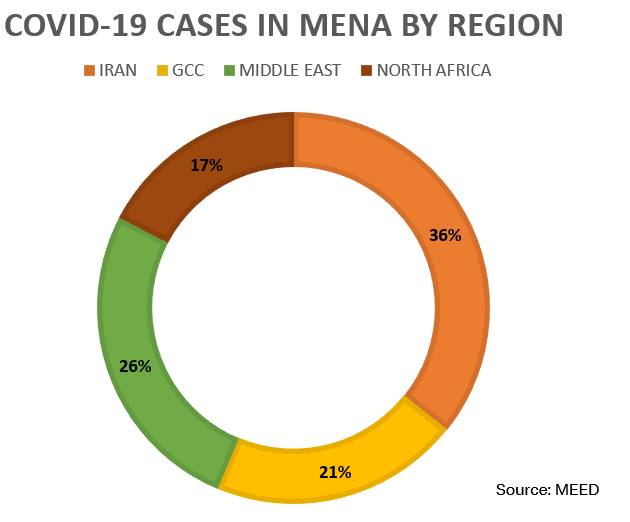 Kuwait
Efforts to encourage people to receive the Covid-19 vaccine are gathering pace in Kuwait, which said on 4 August that 91.1 per cent of deaths due to Covid-19 in July were in unvaccinated individuals. Abdullah al-Sanad, spokesperson for the Health Ministry, said the vaccination campaign is active at 101 centres in the country, with more than 100,000 daily appointments confirmed for the jab.

Iran
On 2 August, Iran registered the highest number of new Covid-19 infections in 24 hours, reporting 37,189 new cases. The development came as Tehran steps up vaccine manufacturing efforts, with the Iranian-made Sputnik vaccine, first developed in Russia, undergoing final testing as of early August. Iran expects to be able to produce 900,000 and 3.5 million doses of Sputnik V and Sputnik Light, respectively, each month.

Local media reported that the vaccine has been sent to Russia’s Gamalia Institute for final tests. Iran is also producing vaccines jointly with Cuba and Australia, which could be released by September.

The Iranian-Australian vaccine named Spikogen is in third phase clinical trials, with 17,000 people participating in the tests. The first phase of the study was conducted with Australian subjects, with 400 Iranians participating in phase two.

Egypt
Cairo has yet to decide whether to provide a booster shot of the Covid-19 vaccine, local media has reported citing Health Ministry adviser Noha Assem. She reportedly said China's Sinovac would be made available to Egyptians shortly, and the ministry was pursuing a broadening of its inoculation programme to reach more people.

Iraq
More than 2 million doses of the Pfizer-BioNTech and Sinopharm vaccines are said to have reached Iraq’s Health & Environment Ministry in a shipment earlier this week. Kimadia, the state company for the marketing of drugs and medical appliances, said the vaccines would be distributed across the country, according to Kurdish media.

Jordan
Amman has received 5 million protective surgical masks worth a total $1.57m from Germany through the World Health Organisation. Jordanian Health Minister Feras al-Hawari acknowledged the donation, which he said would “go a long way” in helping Jordan protect its frontline workers as the Hashemite kingdom grapples with a spike in Covid-19 cases. 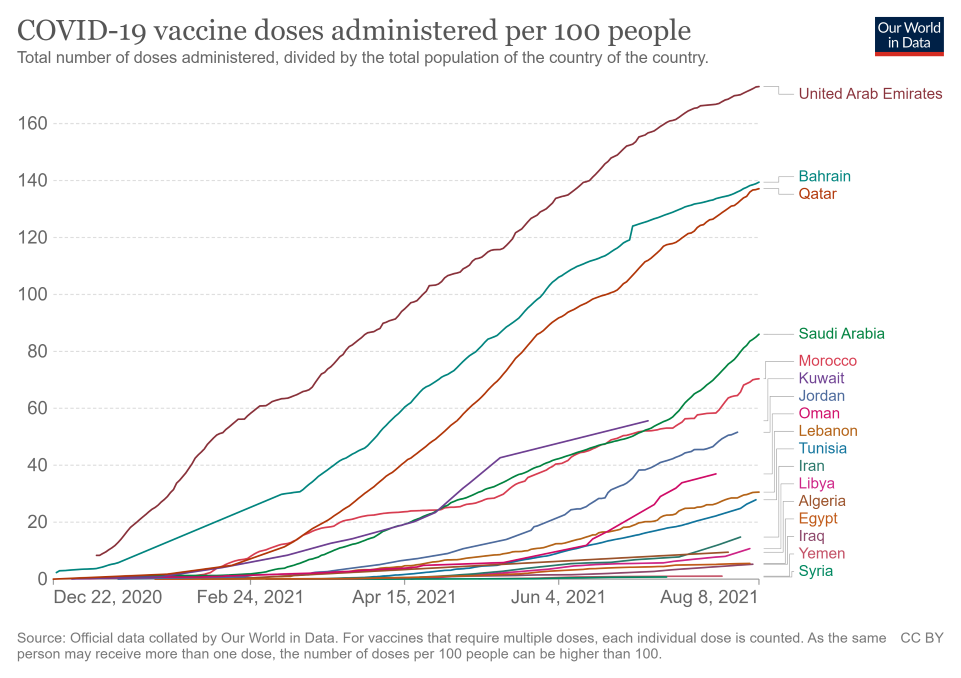 Morocco
The nightly curfew was lengthened to begin at 9pm instead of 11pm local time from 3 August as Morocco faces a surge in Covid-19 infections, with the curfew to run daily until 5am. Agadir, Casablanca and Marrakech will be closed as well.

Holders of the vaccine pass or those travelling for essential work are exempt from both the night-time curfew and travel restrictions, but the decision is expected to hurt tourism recovery in the country. Gatherings of more than 25 people are also prohibited, and hotels are limited to 75 per cent of capacity.

Morocco has fully vaccinated about 10.9 million people, representing around 30 per cent of the population, with 26 million Johnson & Johnson, Oxford-AstraZeneca and Sinopharm doses administered.

Libya
Several shipments of vaccines have reached Libya over the past week, including 2 million doses of Sinopharm. While receiving the delivery in Tripoli, Prime Minister Abdulhamid Dbeibah urged citizens to get vaccinated.

Italy also said last week that it would donate 240,000 Oxford-AstraZeneca doses to Libya, while local media reported that at least 250,000 doses of Pfizer-BioNTech are also expected in the country imminently.

A three-day lockdown has been implemented in the centre and west of the country ahead of the upcoming Hijri new year holiday.

About 50 per cent of the country’s 12 million population is planned to be administered at least the first dose of a vaccine by mid-October. A vaccine drive for individuals aged over 40 years was launched on 9 August as infections surge in the country.

Syria
The Syrian Health Ministry on 29 July received a batch of Covid-19 vaccines from the Red Cross Society of China at Damascus International airport.