The number of Covid-19 cases in the Middle East and North Africa (Mena) region crossed 11,242,662 on 2 August, according to Worldometers data collated by MEED.

The North African countries of Algeria, Libya, Morocco and Tunisia together comprise 17.2 per cent of the total cases, while the rest of the Middle East makes up 26.7 per cent of infections. 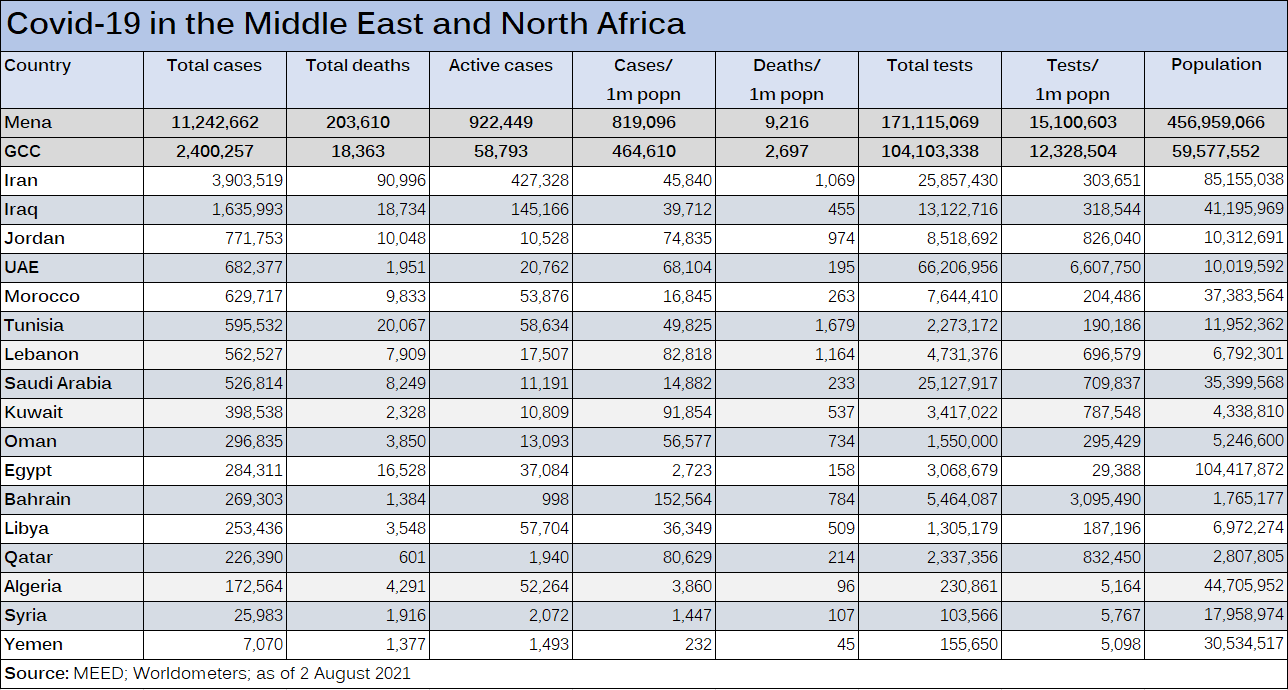 The weekly growth is 30 per cent higher than the 319,664 cases recorded in the week between 19 and 25 July, and comes as new waves of Covid-19 are detected in the region – particularly in Iran and North Africa – where the more easily transmittable delta variant is spreading.

Fears of an impending fifth wave in Iran prompted Health Minister Saeed Namaki – expected to be replaced following Ebrahim Raisi’s inauguration as president on 5 August – to suggest a two-week lockdown overseen by armed forces and law enforcement in the country.

Namaki is understood to have made the request in a letter to Supreme Leader Ayatollah Ali Khameni, writing that a delta variant-prompted fifth wave could prove “catastrophic” and “irreversible” as it threatens Iran’s healthcare personnel despite the availability of hospital beds.

“The pressure is so high that I’m worried even this plan won’t be enough, unless we reduce the exponential load of illnesses through quick preventive measures and boosting adherence to health protocols.”

North African countries including Algeria, Libya and Tunisia have reimposed restrictions to curb the spread of the delta variant, even as large parts of the Middle East – including GCC countries – continue to reopen borders and public places with precautions in place.

Saudi Arabia
Umrah pilgrims have been allowed to enter the Mecca Grand Mosque following the completion of Hajj 2021, with foreigners to be permitted to perform the pilgrimage from 9 August, which is expected to be the start of the new Islamic year.

Saudi Arabia said on 30 July it would reopen its borders to fully vaccinated foreign tourists from 1 August following a 17-month closure. Travellers fully vaccinated with locally approved jabs, including those by Pfizer-BioNTech, Moderna, Oxford-AstraZeneca and Johnson & Johnson, are allowed to enter the kingdom “without the need for an institutional quarantine period”, provided they carry a negative Covid-19 PCR test result procured within the past 72 hours.

More than 26.9 million vaccine doses had been administered in Saudi Arabia as of 1 August.

UAE
Dubai
Private hospitals in Dubai have started offering the two-dose Pfizer-BioNTech vaccine, marking an expansion of the campaign that started with government-operated health centres in the city. Aster Cedars Jebel Ali and Zulekha Dubai are among the hospitals where both doses of Pfizer-BioNTech are available for residents, local media reported.

Abu Dhabi
From 1 August, only individuals considered to be at low risk of contracting Covid-19 will be permitted to enter government buildings in the UAE capital, with similar entry restrictions expected in additional public places in Abu Dhabi starting later this month.

Visitors to government departments must be vaccinated or present a negative PCR test taken within 48 hours to enter the buildings. Those exempted from taking the vaccine must provide a negative test result, but the rules exclude individuals aged under 16.

From 20 August, visitors will be required to show proof of vaccination status to enter shopping centres, restaurants, cafés and retail outlets, including those outside shopping centres, except supermarkets and pharmacies, as well as gyms, health clubs, resorts, museums, cultural centres, theme parks, universities, institutes, public and private schools, nurseries, and recreational facilities and sporting activities. Children aged under 15 and exempted individuals are excluded from the rule.

Bahrain
France has added Bahrain to its list of green countries starting 1 August, which means tourists from the kingdom can travel to the country by displaying proof of vaccination status, or in the case of unvaccinated individuals, a certificate of recovery dated more than 11 days and less than six months, and a negative PCR test result received 72 hours before departure. 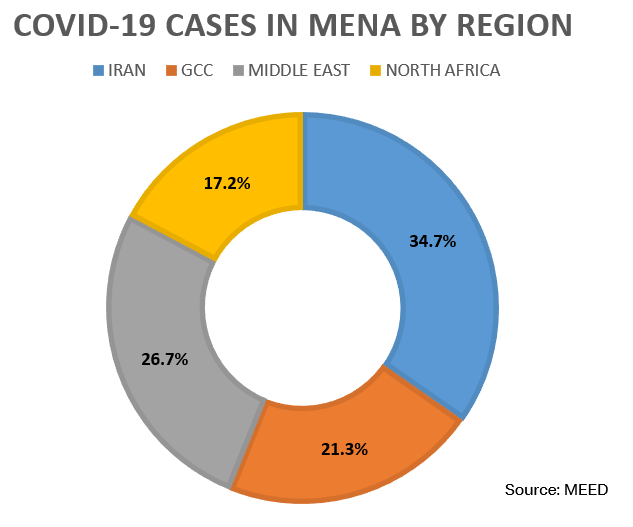 Oman
Muscat has started administering the second dose of Covid-19 vaccines for people who received their first dose 10 weeks previously.

Oman’s night-time curfew, rolled out to limit the spread of Covid-19 cases over the Eid al-Adha holidays, was extended on 29 July, as part of which business activities and individual and vehicle movement is banned between 10pm and 4am.

Three million doses of a Covid-19 vaccine are expected in Oman over the next two months, Health Minister Ahmed al-Saidi told local media on 27 July.

Kuwait
Vaccinated expatriates have been allowed to re-enter Kuwait from 1 August after they were banned from entry in February, with the government continuing to limit the number of daily arrivals at the airport at 1,000.

Qatar
More than 2 million people, reflecting 81 per cent of the eligible population, in Qatar have received at least one dose of a Covid-19 vaccine, with the total number of doses administered in the country reaching 3.7 million as of 28 July.

About 98.6 per cent of the population aged over 60 has received at least one dose, while 93.5 per cent of individuals in the age group have received both doses.

Iran
The Cuban-designed Soberana 2 vaccine will commence production in Iran under the name ‘PastuCovac’ this month, making the Middle Eastern nation the first outside Cuba to produce the jab. Soberana 2 is said to have 90 per cent efficacy, but these figures are yet to be peer-reviewed, according to local media reports.

Iran’s Pasteur Institute earlier this year collaborated with Cuba’s Finlay Institute, developer of Soberana 2, to implement the phase 3 clinical trials of the jab in Iran, where the vaccine received emergency approval in July.

Iran’s Food and Drug Administration said on 29 July that a shipment of 300,000 doses of Oxford-AstraZeneca vaccines made in Russia had been imported by the country’s private sector as fears of a fifth wave grip Iran.

Egypt
More than 148.2 million doses of a Covid-19 vaccine are due to reach Egypt by the end of 2021, Health Minister Hala Zayed said on 29 July. The shipments will include 20 million doses each of the Sputnik V and Johnson & Johnson jabs, 35.6 million doses of Oxford-AstraZeneca and 2.4 million doses of the Pfizer-BioNTech vaccine. These will be sufficient to inoculate 83.7 million citizens.

Iraq
Half a million doses of Covid-19 vaccines will be delivered to Iraq by the US, it was announced following a meeting between President Joe Biden and Prime Minister Mustafa al-Kadhimi at the White House.

Local Iraqi media reported that Kurdistan typically receives 10 to 15 per cent of the vaccines delivered to Iraq, where a spike in cases is being recorded due to the delta variant of the coronavirus.

Jordan
Greek Prime Minister Kyriakos Mitsotakis pledged to provide 150,000 doses of Covid-19 vaccines to Jordan during a meeting in Athens with King Abdullah.

As of 29 July, 2.9 million people had received the first dose of a Covid-19 vaccine in Jordan, where the death toll since the start of the pandemic reached 10,000 at the end of last month.

Lebanon
Entry to restaurants, cafés, pubs and beaches in Lebanon will be restricted to people that can display Covid-19 vaccination certificates or antibody test results. Non-vaccinated employees of these establishments must conduct a PCR test every 72 hours.

Morocco
A case spike is being recorded in Morocco, where 9,428 new infections were recorded on 28 July, making it the biggest single-day increase in the country.

More than 13.6 million people have received their first vaccine dose in the country, with 10.1 million second doses also administered. More than 3 million doses of China’s Sinopharm vaccine were scheduled to reach Morocco between 23 and 31 July. 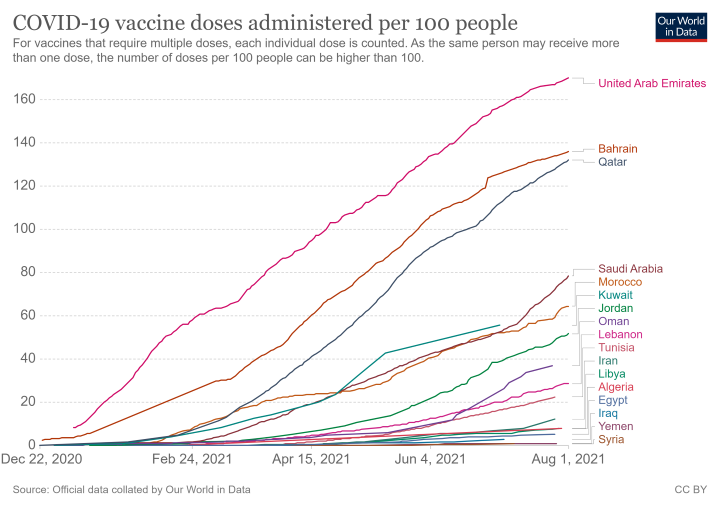 Libya
A two-week curfew with restrictions from 6pm to 6am was introduced in Libya on 26 July as case numbers grow in North Africa.

More than 1 million doses have reached Libya so far and further batches are expected shortly. The government closed its shared border with Tunisia earlier in July to contain infection numbers, and has introduced preventive measures including a ban on public gatherings and closures of restaurants and coffee shops, according to media reports.

Tunisia
Italy has sent 1.5 million doses of Covid-19 vaccines to Tunisia, the office of President Kais Saied announced on 1 August.

Tunisia also received 1 million doses of the Moderna vaccine from the US on 31 July as part of the White House global vaccine sharing allocation plan announced on 21 June, which prioritised an allotment for Tunis. The US Embassy in Tunisia and the US military’s Africa Command also earlier last week coordinated the delivery of 310 oxygen canisters containing one million litres of oxygen for immediate use at Tunisian Health Ministry hospitals.

Algeria
Restrictions on gatherings have been reintroduced in Algeria to contain the spread of the delta variant, the prime minister’s office said. The measures apply to 35 of Algeria’s 58 provinces, and include the closure of gyms, cultural centres, beaches and leisure venues, as well as a curfew from 8pm to 6am. Cafés and restaurants may only provide take-away services.

The delta variant caused 71 per cent of Algeria’s infections in July, according to the government-backed Pasteur Institute.

Syria
The Syrian Health Ministry on 29 July received a batch of Covid-19 vaccines from the Red Cross Society of China at Damascus International airport.