The number of Covid-19 cases in the Middle East and North Africa (Mena) region crossed 14,388,648 on 18 October, according to Worldometers data collated by MEED. 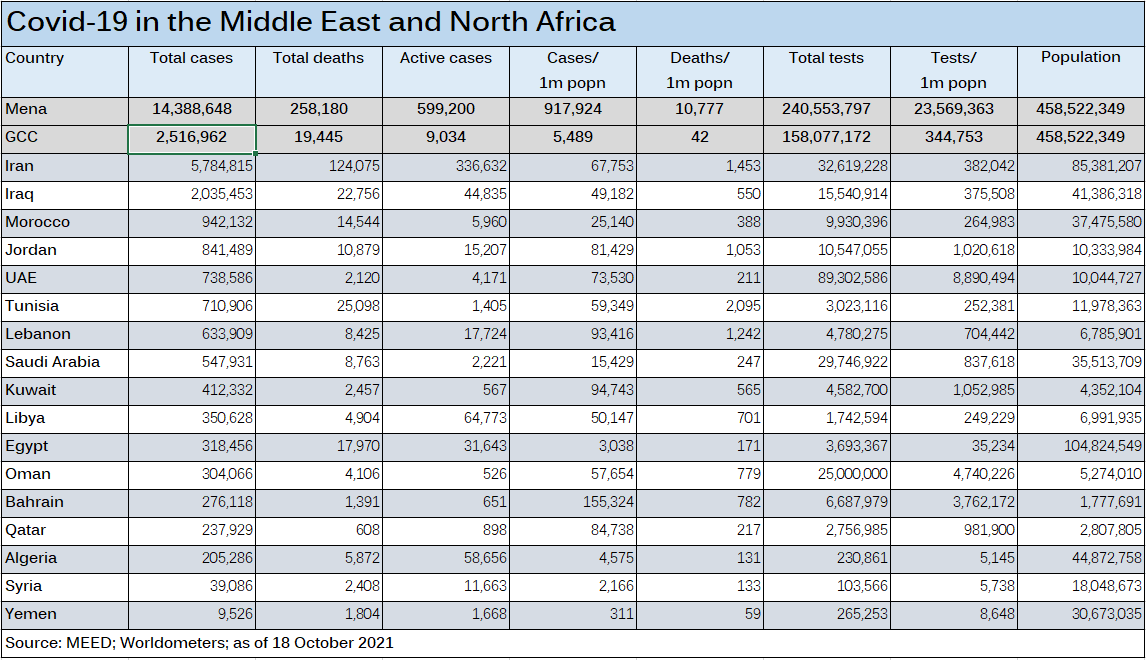 The rate of weekly case growth held steady at 0.8 per cent.

These figures indicate that the continued slowing of Covid-19 infections in the region may be plateauing momentarily.

The majority of the 17 countries tracked by MEED reported weekly case growth of under 0.6 per cent. However, Egypt, Iran, Libya, Syria and Yemen continue to report new cases at a growth rate of over 1 per cent each week. 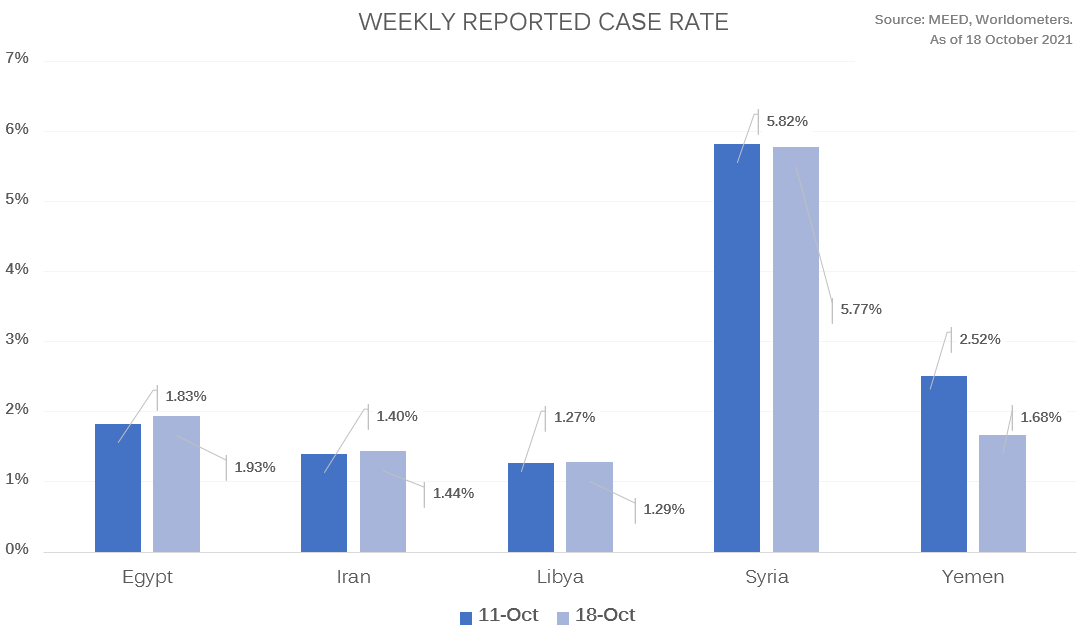 In Egypt, the rate grew marginally from 1.8 per cent to 1.9 per cent as fears of a fourth wave persist in the country.

The weekly case rate has reduced in both Yemen and Syria over the past week.

Syria’s rate has marginally dropped from 5.8 per cent to 5.7 per cent.

Saudi Arabia
Curbs on social gatherings have been lifted in Saudi Arabia, which started relaxing restrictions from 17 October. Face masks are no longer mandatory outdoors, barring specific locations such as the Grand Mosque in Mecca and the Prophet’s Mosque in Medina, where worshippers and staff must wear masks. Both mosques will return to full capacity, but visits must be reserved through the health ministry’s apps.

Social distancing is no longer mandatory in the kingdom at social gatherings or in public settings such as transport, restaurants and cinemas, and wedding halls can resume at full capacity.

Airports in Saudi Arabia have also been permitted to resume at full capacity for domestic and international flights. The immunisation status of all travellers must continue to be verified using the health ministry’s Tawakkalna app.

Social distancing and face masks will still be mandatory in locations where Tawakkalna app’s status checks are not applied.

The Kuwaiti cabinet is reportedly also due to review decisions such as removing the mandate on face masks at its weekly meeting on 18 October. 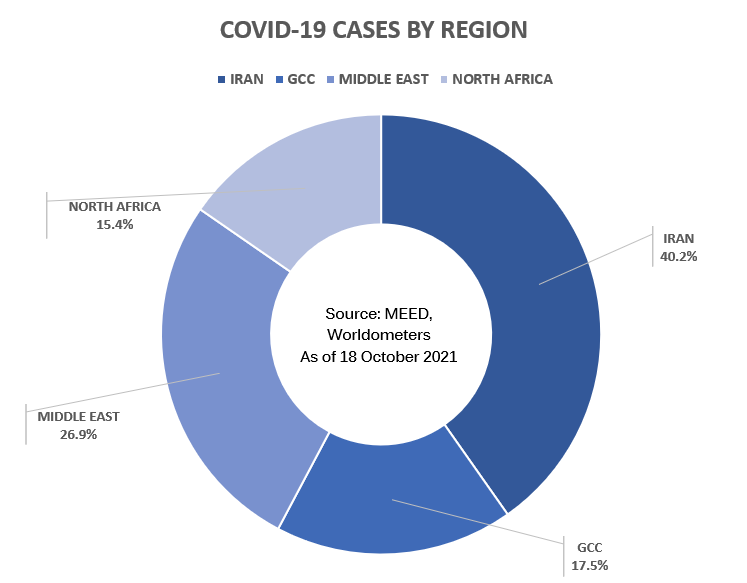 Iran
Three consignments of Covid-19 vaccines, each comprising six million doses, were shipped to Iran by the country’s Red Crescent Society (IRCS) earlier this week, raising its total number of imports to the country to 70.3 million. IRCS has imported 26 consignments from China to date.

Egypt
Cairo received its second shipment of the Pfizer-BioNTech vaccine earlier this week. The shipment comprised 1.6 million doses and was secured through the Covax programme, Health Minister Hala Zayed said.

Egypt’s government has also started enforcing a decree preventing office entry to workers who have not been vaccinated or do not provide negative PCR test results every three days. The facility’s attendance and security officials will be responsible for restricting entry to workers until they have obtained their vaccine, local media reported.

Iraq
The fourth batch of Covid-19 vaccines donated by the Chinese government reached Baghdad earlier this week. The number of doses in the consignment was not specified. The shipment follows similar deliveries from China to Iraq in March, April and August.

Jordan
The International Committee of the Red Cross and Jordan’s Red Crescent Society signed a letter of intent with the country’s health ministry last week to provide logistics support for the national Jordanian vaccination campaign. The non-profit organisations will support the ministry’s mobile vaccination campaigns with vehicles and cold storage carriers.

Morocco
More than 705,500 people received the third dose of a Covid-19 vaccine on the 14th day of Morocco’s booster jab programme, the health ministry said on 17 October. Almost 21 million individuals have received both doses of the vaccine in the country.

The health ministry is calling on citizens who received their second doses at least six months ago to receive a third dose as the country moves to what it has said is a low level of transmission of the coronavirus causing Covid-19.

Mouad Merabet, coordinator of the National Centre for Public Health Emergency Operations at the health ministry, said Morocco’s positivity rate dropped to a 16-week low of 3.5 per cent. According to Merabet, the reproduction rate (Rt) of the SARS-CoV-2 virus in Morocco as of 17 October was 0.91. 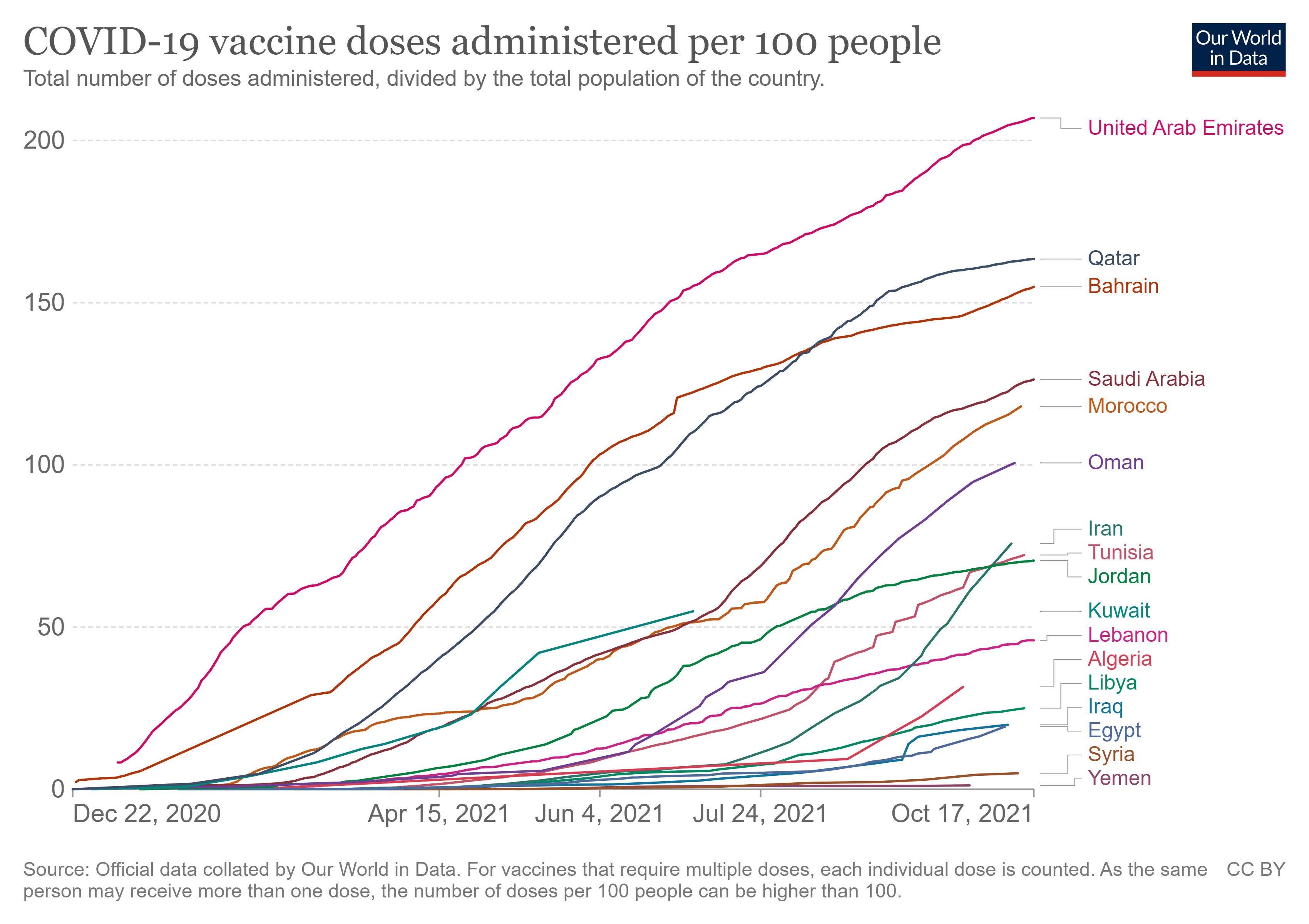